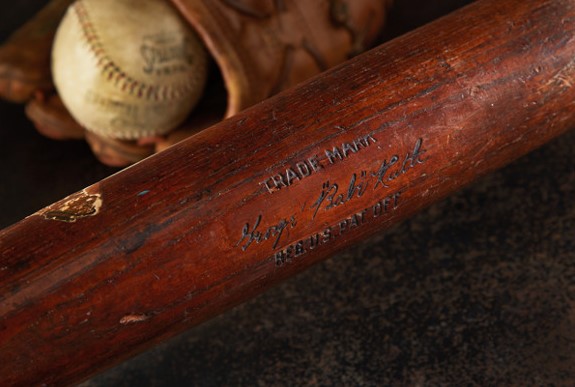 Heritage Auctions has posted a rare game used Babe Ruth bat in its latest baseball auction, dating back to his first three years with the club, according to HA’s info. This would be one that he used in smashing his own record with 59 in 1921, eclipsing the 54 he hit a year earlier and 29 in 1919, his last year as a Red Sox.

From the HA description of the lot, regarding its provenance:

The remnants of an ancient adhesive label on the left barrel speaks to the fascinating history of this relic as part of an early 1940’s Polo Grounds display of game used bats and uniforms from superstar players who had seen action at the storied upper Manhattan ballpark. These important mementos were sold at the end of the summer to raise money for charity, and this Ruth bat was sold to Taube by the man whose employer had purchased the bat from that Polo Grounds sale and gifted it to him when he was a teenager.