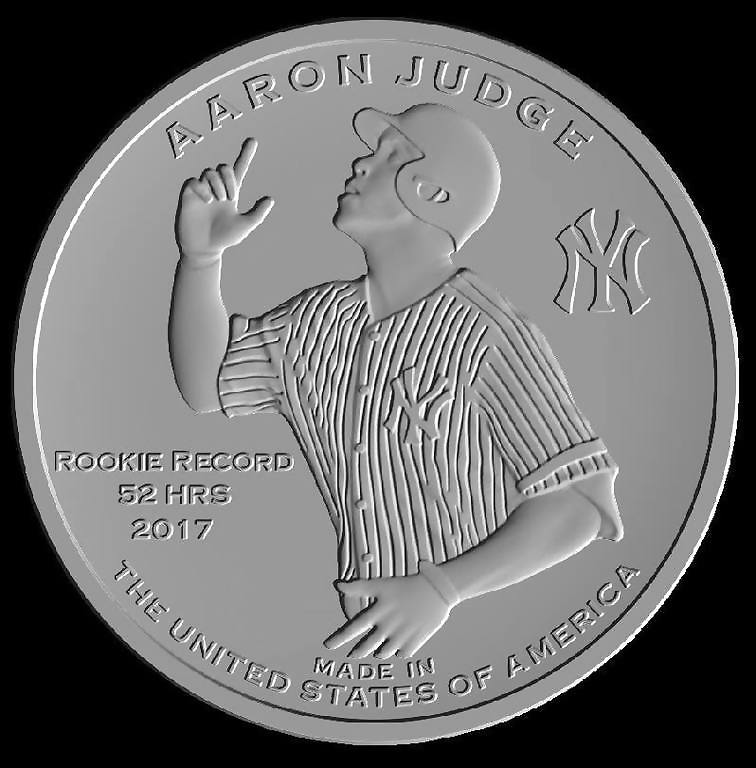 Aaron Judge and Michael Conforto are two of the young stars that New York baseball fans have been buzzing about the past two years. Now fans of the Yankees and Mets outfielders can now get the star outfielder’s likenesses on a collectible coin, part of a series produced by Baseball Treasure, a company that mints officially licensed collectible copper coins featuring 30 current baseball stars.

For the first time ever, a star from every Major League team has been minted in a one-ounce copper coin presented in a full color cardboard mount. Each coin displays the player’s name, position, and etched portrait on the front (or heads), and an action image with a few 2017 stats or accomplishments on the back (or tails). The packs, which are the same size as standard trading cards, retail at $6.95 each.

The coins were designed by Todd Radom, an independent graphic designer specializing in branding for professional sports franchises and events. His work includes the official logos for Super Bowl XXXVIII and the 2009 NBA All Star Game, as well as the graphic identity for Major League Baseball’s Washington Nationals and Los Angeles Angels.

“Baseball Treasure offers the thrill of the chase’,” said co-founder Rick Canale. “With Baseball Treasure, we have added the excitement of including the gold and silver coins. You never know who or what coin you might get.”

Officially licensed by MLB and MLB Players Association, the coins will retail at $6.95 and are sold on the BaseballTreasure.com website, at sports memorabilia shops, Modell’s Sporting Goods, and at the New York Mets, New York Yankees, Philadelphia Phillies, Seattle Mariners, and Washington Nationals gift stores. The coins will also be sold at the National Baseball Hall of Fame and Museum gift shop in Cooperstown and on the Hall of Fame’s website.

“What MLB liked about our product is the “blind pack” nature of it, which recalls the fun of rushing to the store and buying individual packs of baseball cards,” said Canale. “It’s the ‘thrill of the chase.’ You don’t know which player you are going to get. If you are in New York and opened a pack and got Mookie Betts, you might buy another one or try to trade it to get Aaron Judge.”