(Editor’s Note) The Tuesday after Labor Day is really a Monday, isn’t it? – MH)

It’s been more than 7 years since the Mets traded Carlos Beltran for Zack Wheeler. I could write out a random list of occurrences that have taken place since June 27, to give an idea of how long 7 years is, but I won’t, because “more than 7 years” is statement enough.

When they got him, Wheeler was in A-ball, displaying a live arm, some control issues, and a tremendous amount of potential. If the rumors are to be believed, the Mets first asked for Madison Bumgarner in return for Beltran, and when that was declined, Wheeler was their consolation prize, although San Francisco Giants fans worried that their team had just traded away a future star for a 3 or 4 month rental.

Wheeler made it to the majors in 2013 and pitched for slightly more than half the season, during which he displayed the live arm, control issues, and potential that he brought with him from California. In 2014, it was more of the same, only this time for a full season. He wasn’t pitching like the star the Mets hoped they were getting for Beltran, and he was also only 24 years-old, with a somewhat-to-very bright future ahead of him. And then, in what seems to have become a rite of passage for most pitchers, especially those on the Mets, in March of 2015, Wheeler had Tommy John surgery performed by Dr. David Altcheck, who is essentially the Mets version of the 5th Beatle. The expectation was that by having the surgery in spring training of 2015, Wheeler would return by early 2016, possibly even opening day.

That didn’t happen. While he didn’t have any major injuries in 2016, his rehab didn’t go as smoothly as planned, and eventually the Mets decided it would be best not to push him back to the majors before he was ready. While disappointing, this seemed like a wise strategy at the time. All too often, teams bring back players before they’re truly ready, and disaster usually strikes. So, the Mets put a smart plan in place, in hopes that when Wheeler returned in 2017, he’d be ready to reach the potential he showed just a few years prior.

That didn’t happen. Last year was a disaster for many Mets, and Wheeler was near the top of that list. After an ineffective start to the season, Wheeler went on the DL in June with biceps tendinitis, returned to the DL in July with a stress reaction in his right arm, and by the end of August it was determined that it would be best to shut him down for the season. Never mind the fact that many of his teammates had shut down their seasons much earlier, in one form or another.

So it was understandable that the Mets and their fans entered this season without much in terms of expectations for the once future star. Who knew what Zack Wheeler would show up, or even if any Zack Wheeler would show up at all? In fact, when the Mets signed Jason Vargas during spring training, there was talk of Wheeler starting the season in AAA Las Vegas. Then, when Vargas was injured during a spring training game, and it became apparent that he was going to miss Opening Day, many thought Wheeler’s spot on the Opening Day roster was saved.

That didn’t happen. Zack Wheeler’s spring training showing was so disappointing that he started the year in Las Vegas anyway. Although, to be fair, he was up with the team just a couple weeks after the season began, and hasn’t left since.

Don’t let that fool you though, Wheeler did not pitch especially well for much of the beginning of the season. Prior to the All-Star break, Wheeler had a 4.44 ERA (and it seemed even worse than that), a 3-6 record, an opponents’ batting average of .253, had given up 11 home runs in 107.1 innings pitched, and as far as I knew, had only 1 fan left – my friend Paul.

Without getting into unnecessary details, let’s just say that Paul is a big fan of good pitching. Throughout this season he would tell me that Wheeler was still the pitcher that the Mets thought they had obtained in 2011. He would text me when Callaway would pull the rip cord too early on one of his starts, and would promise me that this guy was better than his 6.43 ERA in May would suggest. In pointing out how quickly Wheeler works, Paul suggested back in April that Wheeler had the ability to pitch better than anyone on the Mets.

And then it happened. August happened. Zack Wheeler happened. Last month, Zack Wheeler was the Mets best starting pitcher, statistically. He was even ever so slightly better than Cy Young Award candidate, Jacob deGrom over their 6 respective August starts. In fact, going back a slight bit further, Wheeler’s 8 starts since the All-Star break have been delightful, a word that’s rarely used these days, especially when talking about the Mets. In that time, Wheeler is 6-1 with a 1.19 ERA, 53 K’s in 53 innings, an opponents’ batting average of .195, yielded just one home run, and earned many more fans than the solitary Paul. In fact, Wheeler has been so good for the Mets over the last 6 weeks, that the team has stopped hitting for him, another rite of passage for Mets pitchers.

When it first appeared that the Mets front office was going to give up on the 2018 season, and trade away some current players for some future help, there was a good deal of talk about the potential of trading Jacob deGrom or Noah Syndergaard. When those discussions began to die down, the focus shifter to Zack Wheeler, who was just beginning to show signs of life. If the rumors are to be believed, the Mets were willing to trade Wheeler but not enough value was offered in return, so the Mets kept him. And even though they’re not playing with hopes of a postseason run, they are trying to evaluate what they have now, what they have for the future, and what they’ll need to contend sooner rather than later . Perhaps it’s reasonable to think that they actually have another top-of-the-rotation starter to add to their mix.

One great month, or even two great months, do not make a player. As true as that may be, when a player comes up through the minors with fanfare and its accompanying expectations, it’s easy to hold on to the hope that a string of great starts suggests, even if it is much later than had originally been anticipated. 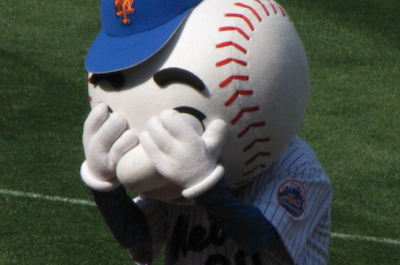 Going Nine: Ronnie And Me