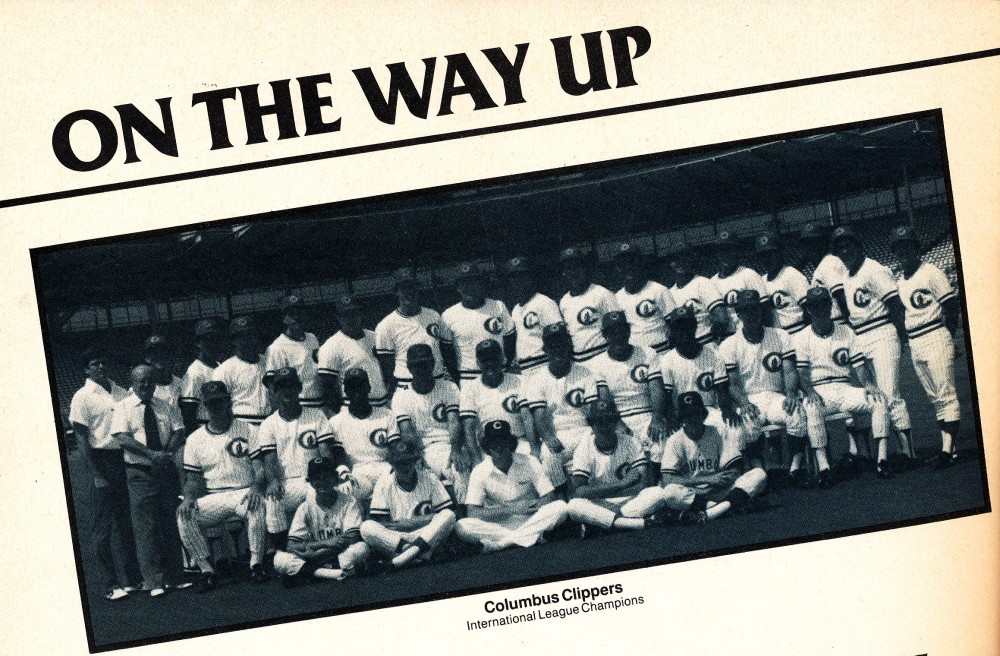 In 1979, the Yankees switched AAA affiliates from Tacoma (a one year stop) after more than a decade in Syracuse, to Columbus, Ohio, in the home state of owner George Steinbrenner. For fans of the 1976-1981 Pinstripe dynasty that brought five division titles, four world series appearances and two titles to the Bronx, the “Columbus Shuttle” became part of the vernacular when a few youngsters, notably Steve Balboni, Andre Roberston, Bobby Meacham and a few others along the way, found themselves aboard the less than two hour flight east—then west—then east—you get the idea—at the whim of the Principal Owner or one of his numerous GMs during that period.

There are even a few names Mets fans will be familiar with: John Pacella, a spot starter for the club for most of 1980; and Mike Bruhert, who had been in their rotation throughout 1978 and later went on to be the pitching coach at Fordham, where he mentored future major league hurler and brief Met Pete Harnisch.

The Yankees yearbooks in those years had a section titled “On the Way Up,” highlighting players ostensibly heading to the Bronx. Some like Willie McGee and Fred McGriff got waylaid by trades (for Bob Sykes! and Dale Murray!), others by injury, and still others by other circumstances that kept them out of Yankee Stadium. In 1981, amidst the mid-season major league strike and coming off two International League championships seasons, many of those players formed the Columbus Clippers, a squad that by force of its talent and personalities formed enough of a story for the intriguing new book, Almost Yankees: The Summer of ’81 and the Greatest Baseball Team You’ve Never Heard Of (Univ. of Nebraska press, 336 pps, $29.95).

The names whose exploits author J. David Herman chronicles in the book will be familiar to those who followed those Munson-Guidry-Jackson Yankees. Balboni, future no-hit starter turned closer Dave Righetti and future manager Buck Showalter all played for a veteran skipper that most Yankee fans probably don’t recall—Frank Verdi. But Brad Gulden, Bobby Brown and Dennis Werth had all been part of the last two Yanks teams, and the enigmatic Marshall Brant, sometimes among those “On the Way Up” lists but always seemingly a “AAAA” player on the cusp (185 career minor league home runs plus 25 more in two years in Japan) but not quite there (2 singles in 20 MLB at bats), also contributed much to the ’81 Clippers, both in their success on the field and in making Almost Yankees such a great read.

There is the Steinbrenner factor, the strike which placed a larger—albeit fleeting—emphasis on the Clippers, and the day-to-day stories of the players chasing the IL crown but also their own big league dreams. There’s poor infielder Tucker Ashford and pitcher Mike Griffin, who felt the full wrath of Steinbrenner after poor performances in spring training games, And Brown, the toolsy “can’t-miss” outfield prospect who couldn’t replicate his Clippers stardom in the bigs.

To Herman, who as an 11 year old living in Columbus, “the Yankees are just names in the paper. The Clippers are real,” an early-season cross country family move spells disaster for following his favorite team. In the pre-Internet (even pre-USA Today) days, getting Clippers scores and IL standings is nearly impossible. Almost Yankees is Herman’s look back at a team that was lost to him, and to many outside of its Columbus rooters. Now, both for him and especially for fans of that Yankees dynasty but really for anyone who likes stories of minor league ball in a bygone era, it’s found again.