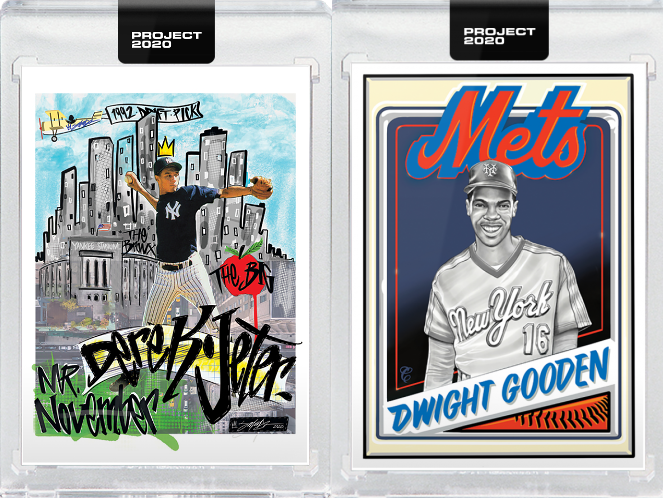 As 20 commissioned popular artists across the world continue to re-imagine 20 iconic cards from the past 70 years in the Topps Company’s “Project 2020,” the first numbers are in, and with three Mike Trout cards and three of Derek Jeter among the top seven sellers, more than 232,000 cards have been purchased by fans. Showing the diversity of talent and styles among the eclectic artists, cartoonists and pop culture influencers creating the masterworks, the top nine selling cards are from nine different artists.

Leading the way are three Trout entries, with Ben Baller’s (@benballer) eclectic interpretation of the superstar’s 2011 rookie card selling 34,950 copies, more than double any other card in the set of 66 issued to date. Fucci’s (@FucciArt) Trout posted 16,430 sales, while Andrew Thiele’s (@ArtekNYC) effort netted 13,199 purchases. The Derek Jeter 1992 work by King Saladeen (@Kingsaladeenart) is the fourth-highest at 9,873, with Jacob Rochester’s (@jacob_rochester) 1989 Ken Griffey Jr. checking in at 9,356 units.

Baller’s eye-catching Trout design, which features a charcoal background with a hint of angel wings in the background, a metallic Angels classic interlocking C-A logo and bejeweled “trout” name in lowercase across the bottom, is one of four cards of the three-time MVP issued to date. The four have accounted for a total of 67,510 sales to date.

“We couldn’t be more pleased with the reaction by collectors, artists, players and baseball fans in general to the first cards that these world-class creators have produced,” said Jeff Heckman, Global Director of Ecommerce. “What is most exciting is that, of our top 16 sellers, 14 are from different artists. And every single card has had at least 1,000 cards sold, a tribute to their great work across the board.”

In the spirit of its popular “TOPPS NOW” program, two Topps “Project 2020” cards are issued daily on weekdays via the Topps.com website. The cards are only available for a 48-hour period from the time each is introduced. Interest in the program and the cards continues on the upswing, as most of the top 20 sellers have been issued in the past three weeks.

A Look At The Yankees Farm System with Bernie Pleskoff