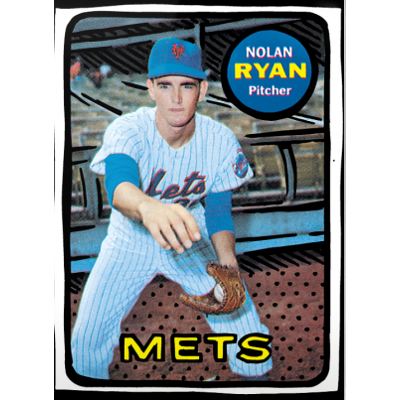 Artist Joshua Vides‘s interpretation of the 1969 Nolan Ryan, Gregory Siff‘s take on the 1992 Derek Jeter and Ben Baller‘s work on the 1985 Dwight Gooden are among the top sellers as the Topps “Project 2020” series surpassed the marks of 100 cards issued and 1,000,000 sold this week. In the program, 20 commissioned popular artists re-imagine 20 iconic cards from the past 70 years.

Last week’s Keith Shore interpretation of Ken Griffey Jr.’s 1989 card has led the way with 99,177 units, surpassing Vides’s Ryan, which set the highest mark the day before with 64,629.

Perhaps best reflecting the depth of the talent pool and interest from a variety of fandoms, the top 10 selling cards were created by nine different artists, and seven of those depict distinct players. Two Baller offerings (Gooden and 2011 Mike Trout,) dot the top 10 sellers, while three Mike Trout cards and two Derek Jeter depictions are the only player repeats.

“’Project 2020’ has taken on a life of its own, especially over the past month,” said Jeff Heckman, Global Director of Ecommerce. “We’ve been blown away by the amazing designs that these talented creators have produced, and we are gratified that the work of so many of them have been so popular with fans and collectors.”

In the spirit of its popular “TOPPS NOW” program, two Topps “Project 2020” cards are issued daily on weekdays via the Topps Project 2020 website. The cards are only available for a 48-hour period from the time each is introduced.