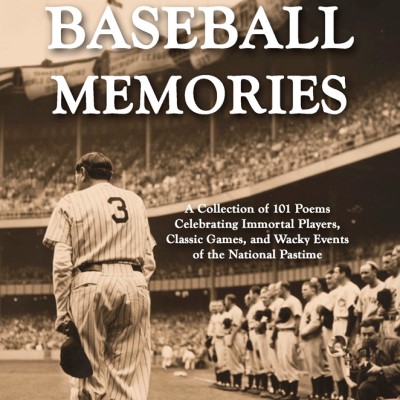 As baseball poetry goes, “Casey at the Bat” and “Baseball’s Sad Lexicon” get the lions’ (and Tigers’ and Cubs’) share of the attention. Go ahead, try to name another without typing “baseball poems” into a Web browser.

There are dozens of others, of course, but none have the enduring popularity of Ernest Lawrence Thayer‘s tale of the Mudville Nine and Franklin Pierce Adams‘s lament about a certain double play combination from more than a century ago. Gonfalon!

But now, Ronald Mayer takes fans into all eras of baseball with his collection of original poems in Baseball Memories: A Collection of 101 Poems Celebrating Immortal Players, Classic Games and Wacky Events of the National Pastime (Sunbury Press, 210 pps.). Mayer, author of several other baseball books, many relating to the New York area, took some time this week to talk to Gotham Baseball about his latest work.

Gotham Baseball: What made you want to write poems about baseball?
Ronald Mayer: I am not a lover of poems or poets except for Ogden Nash. One day I was reading one of his books of poems and it just hit me. Why not poems about baseball, great players, classic games, and wacky events, thus Baseball Memories. Once I started writing I found it to be a joy. Yes, at times it was frustrating finding the correct word to rhyme. To a certain degree it is like working a crossword puzzle. I also looked for books that had been previously written about baseball in rhyme and didn’t find any. I’m not sure what that means, if anything.

GB: How did you decide on which moments, people and teams/seasons to chronicle in the book?
RM: It was a selection I believed would be interesting, informative and readable. In addition, I must admit I favored players I rooted for and liked. Joe DiMaggio and The Mick come to mind. But they were not all Yankees. Ted Williams hitting .406 in 1941 was a natural. This poem prompted me to write about Tony Gwynn who was stuck on the West Coast and received little attention, but he had a chance to hit .400 if not for the shortened 1994 season. Beer Night in Cleveland is an unbelievable story of a stupid idea gone wild. Go figure the ending!

GB: How much did you have to research some of the more obscure ones, and what are some things you learned putting the poems together?
RM: Even the most obscure subjects and events were not difficult to research. I have a baseball library that totals close to 800 books. Add to that the enormous amount of information on the internet and you have pretty much everything at your finger tips. I have learned that you must check every fact! And check them twice to be certain. Also, rewriting is critical. I am sure you know this, but I have put some piece of writing down as finished only to pick it up days later and discover a better way to say it.

GB: Which were the hardest to put into verse?
RM: That would be the poems that involved lots of stats. They were tricky and I had to work extra hard to get them into a meaningful verse that rhymed and not bore the reader. The poem I wrote about Rogers Hornsby is a good example. Stats often can be boring, especially when repeated so I tried to mix them up and highlighted 1922. In that season he led the league in seven offensive categories, telling of his accomplishments but also hoping the reader would be keeping track of the seven. Another difficult story to tell was ‘Mystery Man.’ It was about Moe Berg and his spying in World War II. What made it difficult was separating the myths and truths. At times it became confusing. So I put in these two lines: ‘Keep in mind it is difficult to separate fact from fiction. Take with a grain of salt the following depiction.’

GB: Were there any subjects you wanted to cover but just couldn’t come up with any rhymed couplets?
RM: Not really. It wasn’t a case of trying to write a poem about a player or event and fail. It was more a case of finding the subject and deciding if it was or wasn’t interesting. Once I decided on a subject, whether a player, event or unusual baseball happening and was convinced I could put it into a rhyming narrative I did not quit. At that point I pretty much knew how the story would progress and the ending. While on the subject of endings, I made an effort to have a meaningful ending in all my poems. I also tried to have a surprise ending, if possible. I believe I can safely say all the endings were either a surprise or made sense. None of my poems left the reader confused, right?

GB: Did you go through a lot of revisions on each poem, or did they come pretty easily to you?
RM: Some came quite easily, others were very difficult. I would work for hours trying to write four lines that would make sense and rhyme. Sometimes I would work for an hour or so and the result would be nothing. Other times I would be stuck on trying to get two lines to rhyme, would leave it and come back the next morning and bang, it clicked! And there were times when I wrote four lines, after laboring for quite a while, and toss it, then start a whole new approach with the same subject.

GB: Which of the poems are you most proud of? Do you have a few favorites?
RM: That’s like asking which of your children you like best. Having said that, I do like ‘The Immortalized Three.’ I liked discovering the fact all three players Tinker, Evers and Chance were in positions that were not their original, which I didn’t know. ‘A Fans Point of View’ is another poem I like because it appeals to the heartbroken Dodger fan. I like ‘The Streak’ because DiMaggio was one of my favorite ballplayers and I am a life-long Yankees fan. I found ‘Stranger Than Fiction,’ my longest poem, to be a fascinating story with a clever ending. But my favorite is ‘Hall of Fame Lineup.’ I borrowed the format from Nash, thus my apologies.