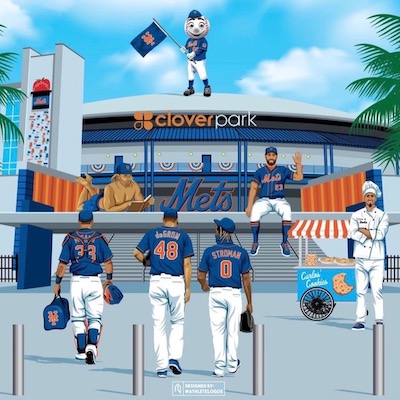 Every spring brings with it a sense of hope, or at least possibility. This year, it all seems more palpable. Still, I find myself questioning if this optimism is okay.

The Mets begin spring training games today. In fact, as a buddy of mine reminded me, yesterday was the last Sunday that the Mets won’t have a scheduled game until at least early October. Wild. Normally, at this point, the concept of dreaming big would begin wrestling with the the common-sense notion of honesty. Spring training is when teams show up to Florizona with an equipment bag full of question marks. It doesn’t take that much imagination to trick the brain into thinking that most of the answers to those question marks will be positive. “Can Adrian Gonzalez recapture his once-consistent bat? Sure.” “Can the Mets version of Rick Porcello be the Cy Young Award-winning version of not that long ago? Of course, it’s the same guy.” Really though, deep down inside, we know better. Or maybe not even that deep.

This year is different. This year, fans got their chief wish – a new owner. And not just any owner, a ridiculously wealthy owner (even in baseball owner terms) who also happens to be a genuine Mets fan. When Steve Cohen revealed that he owns the Game 6 baseball it was both astounding and unsurprising. In fact, I’d probably have the same feeling if he informed fans that he also owned Mookie’s shoes, Buckner’s glove, and Knight’s smile. Then, instead of picking a family member to be the team president, he brought back Sandy Alderson, who was good enough in his tenure as Mets GM to make me wonder what he could do with more money.

When the Mets signed reliever Trevor May in early December, it was presented to fans as the beginning of something, not the ultimate goal. This isn’t to downplay the potential importance of that acquisition. Rather, it’s to say that the team knew that they weren’t a quality reliever away from postseason success. Instead, it was a step in the process, and for the first time in a long time, I actually believed that there was something of a plan in place. The Mets then added a new catcher, James McCann, another piece in the process. A couple weeks later, the Mets made a trade that has the potential to be a hallmark move for this franchise. By bringing Francisco Lindor to Queens, the Mets made a variety of statements, loudest of which was “We’re trying to win, not hoping to win.”

Not to be lost in that deal was that the Mets also obtained a high-quality starting pitcher in Carlos Carrasco. This meant that they didn’t have to overpay for free agent Trevor Bauer (even though they tried to). It also meant that they didn’t have to convince themselves that the other available free agent starters were better than they really are. Truthfully, the free agent starting pitchers this offseason were one ace (Bauer) and a whole bench of mid/late-rotation guys. So the Mets went a different, surprisingly logical (while also somewhat deft) route. That they did all this without forfeiting any of their top minor leaguers gives an idea to the earlier-posed question of what Alderson could do with Cohen’s money. Two years ago, the Mets threw one of their top youngsters in a deal in which they mercifully took on Robinson Cano and his inflated salary.

Getting back to Lindor for a moment, if the Mets are able to sign him long-term then they will likely set this team up with a top player in the league for years to come. At the very least, they come into this season with the on-the-field piece that fans have been requesting for a while: a great bat (switch-hitting, no less), a reliable glove up-the-middle, good speed on the bases, and such an amiable clubhouse presence that it is brought up regularly.

So to recap, the Mets now have a dependable All-Star in the middle of the lineup, a new top-of-the-rotation pitcher, a quality middle reliever, a highly-regarded young catcher, some other important roster pieces that I haven’t mentioned (including Marcus Stroman and Taijuan Walker), and a nearly-ideal new owner. I say “nearly-ideal” because he does have some controversies in his past.

Speaking of controversies, last year the Mets hired Carlos Beltran to be their new manager. Then in mid-January, after he was implicated in the Houston Astros cheating controversy, they let him resign. This year, the Mets brought in a new general manager, Jared Porter. Then, again in mid-January, they parted ways with him after it was revealed that he had sent sexually explicit texts to a female reporter years ago. The Mets have since fired a coach (or “hitting performance instructor”) over multiple sexual harassment claims, while also looking into similar allegations against former manager, Mickey Callaway.

So, to recap this part – the Mets have moved on from some bad characters, while also adding a number of new charismatic players onto the roster, like May, McCann, Lindor, Carrasco, and we can include Stroman, who still feels new. The team already consisted of players who were fun to root for, and it appears that they’ve only increased that vibe.

Does this all add up to postseason success? I have no idea. They’re a much improved team on paper, and still they’re not a lock to make it to Sunday games beyond October 3rd. Not to mention that the World Champion Dodgers didn’t get worse and the never-been-World Champion Padres appear to have gotten much better. Even so, as we prepare to watch the Mets play for the first time in 2021, I find myself genuinely excited for the upcoming season, and not just because I automatically get excited for baseball.

This is not the first time I’ve been this excited for a Mets season. Sometimes that’s worked out well, other times not so much.  At least nobody on this team has tried to convince the baseball world that he’s in the best shape of his career. Maybe things really will be different this year.