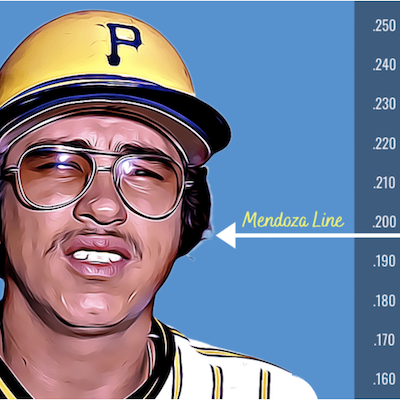 For over 40 years, major league hitters have used the idea of the “Mendoza Line” as the border to no-man’s land. With about 30% (25% for the Mets) of the 2021 season in the books, the Mets, and most other teams, are flirting with treating it as the norm.

Baseball has been source of entertaining nicknames for over a century. However, when there’s a situation named after a ballplayer, that usually signifies a problem. “Merkle’s Boner” refers to a mental mistake by New York Giants rookie, Fred Merkle, in a crucial game in the 1908 season. Of course, by now we are all too familiar with “Tommy John Surgery”, which refers to infamous ulnar collateral ligament (UCL) reconstruction elbow surgery. John, a pitcher who won 288 games over a 26-year career, was the first major league baseball player to undergo this surgery  (1974). And then there’s the “Mendoza Line”, named after a light hitting, solid fielding, mostly backup infielder named Mario Mendoza. Apparently, while Mendoza was straddling a .200 batting average during his 1979 season with the Seattle Mariners, his teammates Bruce Bochte and Tom Paciorek (who coincidentally played in 46 games with the 1985 Mets) invented the term.

For decades since, batting under the Mendoza line was considered plain unacceptable. Even in recent years, as the importance of batting average seems to have decreased in the eyes of many, it was still understood that anything below the Mendoza line was brutally ugly. In fact, by the time yesterday’s games were over, there were over 40 regular or semi-regular players in the majors batting below .200, including some historically excellent hitters. Chief amongst these is Francisco Lindor, who is flirting with the Mendoza Line with his .194 batting average. The worst offender (or non-offender in this case?) is San Francisco Giants catcher Curt Casali who is batting .102(?!?!), having only gotten 6 hits in 59 at-bats so far, while striking out 20 times. Either he has a great arm, or he has some incriminating information he’s using to blackmail his manager. These days I would say those two options are equally likely.

Looking at these numbers, along with many other storytelling figures, it’s not all that surprising to see so many no-hitters so far this season. Before I really get into complaining about this, and the sickening abundance of strikeouts, I must remember that this is Monday Mets and not Monday Get Off My Lawn. So, how does this relate back to the team from Flushing?

Sunday’s split-squad-like lineup featured 6 players who were either right around the Mendoza line, or way below it. Only Dom Smith and the exuberant rookie Johneshwy Fargas are reasonably ahead of that mark. Side note, while I generally try not to make light of anybody’s name, “Johneshwy” looks like something I may have written while trying/failing to stay awake when taking notes in high school social studies. Anyway, as if the all the Mets injuries weren’t hard to enough to stomach already, the team had a lineup on Sunday in which 75% of the starters were batting between .000 and .210. Newest Mets acquisition Cameron Maybin, is 0 for his first 16 Mets at-bats. Even Jed Lowrie would have to say, “Dude, that’s rough.” Rookie outfielder Khalil Lee struck out in his first 8 AB’s, and while he has only struck out once in the 7 AB’s since, he also only has one hit overall. Sure, that one hit came at a great time in Friday night’s wild win. Still, .067 is .067. As for the more experienced bunch, catcher and key free agent pickup James McCann is now batting just .200, and the aforementioned Lindor is at .194. For anyone watching only the Mets, this seems disastrous. For anyone paying attention to what’s happening in the rest of the league, this is actually standard.

So far, 2021 has been a pitchers’ season. Aside from the no-hitters, hitting is down significantly while pitchers are enjoying more strikeouts and fewer runs allowed than we’re accustomed to seeing. While we can appreciate how well the Mets starting pitchers and bullpen have generally performed in the first 40 games, we should also realize that this is how well most of the pitchers have done this season. Similarly, as we squint while watching a lineup of players who are past their prime, never had a prime, or aren’t quite ready for prime time, it’s equally important to keep in mind that most of the league isn’t hitting well. This past week, the Mets faced off against both of the NL East’s representatives from the 2020 postseason, with 3 games against the Atlanta Braves and 3 against the Miami Marlins. They relied on pitching, and just barely enough hitting, to split the 6 games. And still, we wake up on Monday morning with the Mets atop the division.

If the latest information is correct, the Mets should start seeing some of their regulars, or planned regulars, come back over the next couple weeks. Jacob deGrom pitches on Tuesday, JD Davis and Seth Lugo seem close to making their returns, with more to follow in June. If this interim-Mets group can keep counting on their pitchers while squeezing across a few runs, they may be able to hold on to first place for even longer. It’s a lot to ask, and it’s also not impossible. 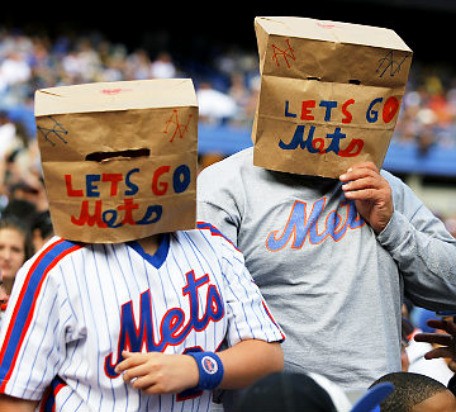 Monday Mets: This Is Why We Can’t Have Nice Things