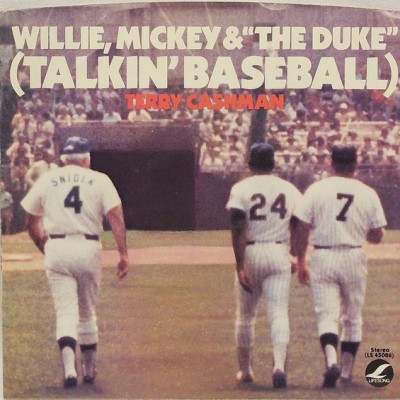 When it comes to baseball songs, there are a few that even casual fans probably know by heart. And while “Take Me Out to the Ballgame” goes back more than a century and “Centerfield” has the star power of John Fogarty, Terry Cashman’s “Talkin’ Baseball,” through its original version that debuted 40 years ago to its numerous variations and updates is certainly in the team picture for most memorable in the genre.

A native New Yorker, Cashman needed a “B” side for a baseball song presented to his production company in 1981. Twenty minutes later, recalling a photo of Willie Mays, Mickey Mantle, Duke Snider (and Joe DiMaggio), Cashman had penned the lyrics that continue to be played at ballparks large and small across the country four decades hence.

“The song wouldn’t have been the same without my New York roots and the New York names in it,” Cashman told Gotham Baseball via telephone from his N.Y. home last week. “The whole idea is that the 50’s in New York was a very memorable and historic time in baseball: you had the three teams, all good, the Yankees were especially great, the Dodgers were terrific, the Giants played in two World Series.

“You had these three great players, playing in the same town, everyone knew how great Willie, Mickey and the Duke were. New York baseball was king.”

In the current issue of Baseball Digest, veteran baseball scribe Bill Madden details the development of the song and how it helped pull fans back into the game following the players’ strike. Before “Talkin’ Baseball” made him famous in baseball circles, Cashman had already found success as a writer and producer, partnering with Tommy West to produce numerous hits for Jim Croce and writing the campy “Sunday Will Never Be the Same.”

In the original version of “Talkin’ Baseball,” which released to some success in February 1981 but only gained momentum in the late summer when the teams resumed play, New Yorkers were prominent in the lyrics. In addition to the three center fielders, players like Bobby Thomson, Roy Campanella, Casey Stengel, Phil Rizzuto, Don Newcombe, Reggie Jackson, Rusty Staub and Tom Seaver were among those making appearances in the song. And it’s Seaver with whom Cashman developed a special bond.

“I met Seaver and he told me he was proud that he was mentioned in the song,” added Cashman, 80. “I also became friendly with Mike Schmidt, he thought it was a real honor to mentioned too.”

The success of the first version led to new sets of lyrics tailored to each Major League team. The Yankees and Mets versions were also well-received by fans, and had frequent updates with new players that teams would request to play at home games.

And while the Yankees and Mets songs are replete with all-time stars, Cashman ran into an issue when setting up lyrics for teams that had relocated.

“The Dodgers and the Giants were tougher,” he explained. “They only wanted their own players, not from before they moved. They adopted Cepeda and McCovey so we used them.”

Who is RHP Ronald Herrera?