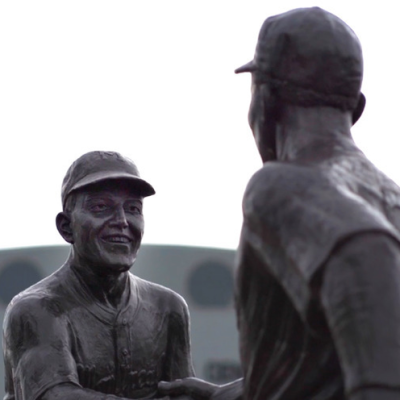 It was a most simple gesture, one played out without fanfare across baseball diamonds for decades. One player offering his hand in congratulations to his home run hitting teammate.

But when Jackie Robinson, playing for the Montreal Royals, hit his first International League home run on April 18, 1946, in Jersey City, there was something different. And as a famous photograph captured the moment, outfielder George Shuba and Robinson completed what can be considered the first handshake of black and white players on a professional baseball diamond.

And while the photo and others taken from a few different angles serve as a record of the event, a statue unveiled this month in Shuba’s hometown of Youngstown, Ohio, by renowned sculptor Marc Mellon is an even more inspiring tribute to an important symbol of progress as the MLB integration experiment was just getting under way.

“I’m proud that this project conveyed not just the joy of sport but the import of understanding,” Mellon, whose notable work includes sculptures of Elie Wiesel, George Eastman, Pope John Paul II, Tony Bennett and many others, told Gotham Baseball from his Connecticut studio. “For a small city, Youngstown, Ohio, put themselves on the map in a very special way.”

The Robinson-Shuba Commemorative statue, dedicated on July 17 with Mellon, Shuba’s son Mike and former Major Leaguer Herb Washington among those on hand, began with a telephone call from Butler Institute of Art Director Dr. Lou Zona to Mellon in the summer of 2019. Intrigued by the project, Mellon got to work right away on researching the significance of the moment and the photo. 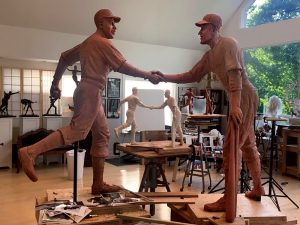 “Amongst my first phone calls when I got this project were to Ken Burns’s office and to Henry Louis Gates’s office and I got nice responses,” added Mellon. “I went to all the work they’d done in documenting the history; in particular the Henry Louis Gates Jr. documentaries on reconstruction were really important to me to understand what this all meant.”

From there, Mellon read numerous books, some well known and others more obscure, about Robinson’s challenges not just once he got to Brooklyn in 1947, but during the year prior in Montreal, which included International League visits to cities that were less tolerant of a Black player on the field competing with whites. For Mellon, capturing the joy and relief in the moment required more than reproducing the photograph in 3D form; getting inside the story from a larger perspective was critical.

“No matter what your race, religion or background, if you care about equal opportunity, even a little bit, I want this sculpture to move you,” said Mellon. “It marks this moment in our history where we are transitioning.”

The timing presented an additional challenge: April 17, 2021, the 75th anniversary of the handshake, became the target date. While Youngstown native Eric Planey, was spearheading the fundraising, Mellon was enlisting the help of three local students to serve as models in his studio, bringing the image to a life form as he developed the models. The COVID-19 pandemic changed that dynamic, and forced the postponement of the dedication by a few months, but not before those sessions had helped form the basis of what would be the final figures.

“I watched videos, I researched what the cleats looked like in 1946,” he added. “I visited several of the Jackie Robinson bronzes across the country–the Dodgers were very gracious despite the fact that they were under construction it was off season, they opened up the gates for me.”

Mellon would spend the summer months into the fall of 2020 refining the final full-scale version of the statue, sending it along to a Long Island City foundry for mold and plaster, then to Greenpoint, Brooklyn, for casting. 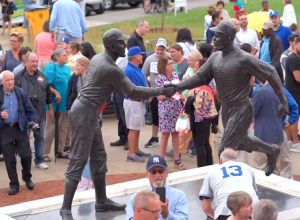 All that led to the final product, “A Handshake for the Century,” which sits proudly in Wean Park, completed about a week before the dedication. It got a tearful thumbs-up from those attending, but even more importantly, from Mike Shuba.

“When he saw the photographs of the full-scale model for the bronze, he cried,” said Mellon. “He was like, ‘That’s my father.'”

At the dedication, Shuba added, “He can rest, and I rest assured that [the statue] will carry on his legacy forever.”