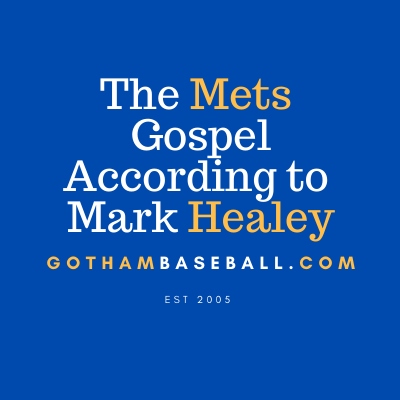 Weiss had to build the entire expansion franchise from scratch, and in addition to trying to build a front office, a farm system, and field a roster, he was also tasked with hiring the team’s broadcasters. The team’s record under his watch was dreadful, but in addition to drafting, signing, or trading for the core of the 1969 championship team (Tom Seaver, Jerry Koosman, Tug McGraw, Jerry Grote, Jerry Koosman, Nolan Ryan, Cleon Jones, Buddy Harrelson, etc.), Weiss’ selection of the team’s radio/TV voices may have been as equally impactful.

Lindsey Nelson was chosen to be the lead voice of the Mets and was introduced to the local media, along with Bob Murphy, at a luncheon at Leone’s. In a New York Times story by Louis Effrat, it was mentioned that a third member of the team would be announced shortly. That third broadcaster would be former Pittsburgh slugger Ralph Kiner, who was urged by Nelson to join the Mets.

The trio would be together for 17 seasons and during the lean years of 1962 to 1967, provided fans with a far more professional product behind the microphone than what was happening on the field.

“Lindsey was the professional. The one who seemed to have been a broadcaster the longest, who would have been a broadcaster even if there were no Mets,” remembered Nick Davis, the award-winning producer/director of ESPN’s 30 for 30 documentary “Once Upon A Time In Queens,” “His constancy, the timber of his voice, the twang … He was like the grown-up in the booth, the anchor for what always seemed like the longest-running broadcast booth in baseball history.  The jackets were part of it.  A big part of it. They were so incredibly important.  And Lindsey was the one who made it run.”

In Curt Smith’s wonderful book Voices of the Game, he quoted Nelson: “Ralph, Bob, and I sat down and decided we were going to level and be straightforward; we had a bad club and we had to say so. And it seemed to work. The Yankees were winners, we were losers, and yet by July 1963, we passed them in radio and TV ratings.”

Nelson was a nationally recognized broadcaster, calling college football games and NBC’s Baseball Game of the Week, and his garish jackets were already a trademark. But “The New Breed,” – as Daily News columnist Dick Young branded the enthusiastic Mets fans of the early years – loved the way Nelson painted the word picture for the lackluster club.

“Every day he wore a different ‘TV Test Pattern Jacket’ and it was glorious!” recalled longtime Mets fan Cliff Wolf. “He spoke to us clearly, enthusiastically, and informatively on both TV and Radio!”

“Growing up with the Mets, Lindsay Nelson was the voice of Summer,” said Mets fan Jeff Cohen. “Add those colorful blazers you have a unique combination of an outstanding broadcaster”.

“When the game was on the line, he could capture the drama, and I’ve tried to emulate that too,” said Howie Rose in an interview with the New York Post’s Steve Serby.

On September 24, 1969, when the Mets clinched the first-ever NL East title, he captured the moment brilliantly.  “This could be it. There’s one, there’s two the Mets are the champions. At 9:07 on September 24th, the New York Mets clinched the Eastern Division of the National League. Look at that scene, Gentry’s cap is gone, it’s a scene of wild jubilation.”

“I loved Lindsey,” recalled Phil Pivnick. “He WAS the Voice of the Mets. In my college application essay to Boston University in 1979, I named Lindsey as one of the three people living or dead I’d like to have dinner with.  Lindsey was why I wanted to be a baseball announcer.  I was able to do it for three years.”

Nelson left the Mets after the 1978 season, and while many believed it was because that Shea Stadium had become “Grant’s Tomb” following the trade of Seaver, it was far more likely that he wanted to be closer to his daughter Nancy, who had moved to the West Coast to pursue her education at USC. Nelson spent three years broadcasting for the San Francisco Giants before calling its quits and began teaching classes at the University of Tennessee, his alma mater.

In 1985, Seaver, then pitching for the White Sox,  was trying to win his 300th game at Yankee Stadium. In a (then) rare moment of synergy, the Yankees invited Nelson to call the final moments of Seaver’s victory. In fact, it was Marty Appel, who was then the executive producer of WPIX-11, who broadcast the team’s game, who thought bringing in Nelson to call the game would be the perfect way to mark the event.

“I don’t even think we asked the Yankees if it was ok,” chuckled Appel. “It worked out beautifully.”

I watched every pitch, and despite the atrocity of Seaver making history in the Bronx – wearing the gaudy ChiSox road uniform – rather than wearing the orange and blue in Shea Stadium, Nelson’s voice made it wonderful.

“It’s a high fly ball that should be playable, [White Sox outfielder Reid] is moving over, Nichols is there, the ball game is over! Seaver has won 300! He’s become the 17th man in the history of baseball to win 300 games!”

Then Nelson let the cheers tell the story.

In 1988, Nelson was honored by the Baseball Hall of Fame with the Ford Frick Award, and during his speech, he said “Sometimes, when I’m in bed, I hear a voice that says, ‘Hello everybody, this is Lindsey Nelson along with Bob Murphy and Ralph Kiner from Shea Stadium in New York.”

On June 10, 1995, Nelson passed away at the age of 76. He left a legacy that lasts even today, as Lindsey Nelson Stadium, the home field of the University of Tennessee’s baseball team, which opened in 1993, is named in his honor.