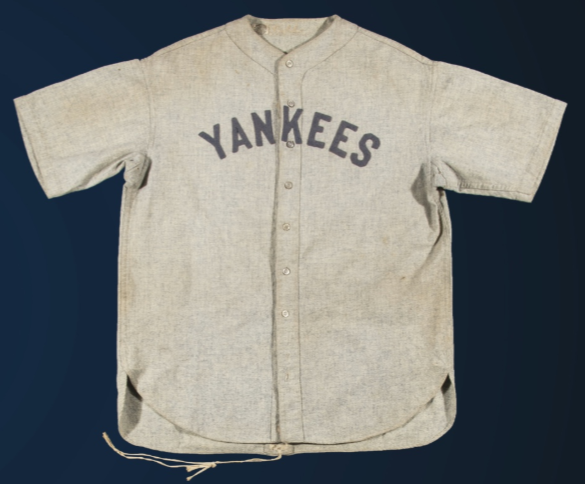 Auctions with Babe Ruth items may be nothing new—there are thousands of balls, photos and other memorabilia with his signature affixed, and a fairly extensive catalog of pieces otherwise connected to the country’s first great sports superstar. But on June 15, Hunt Auctions will conduct a live auction at Yankee Stadium which includes many unique or very rare items from the Sultan of Swat’s personal collection, with the highlight a 1928-30 model era road jersey with YANKEES emblazoned across the chest, part of a four-year period which is the only time that the team wore that name.

“The scarcity and desirability of this particular Babe Ruth jersey simply cannot be overstated. Ruth game worn jerseys are the pinnacle of collecting and investment pursuits within the marketplace with the current offering marking a generational opportunity. We fully expect demand and bidding interest befitting the greatest figure in the history of the sport,” said David Hunt, president of Hunt Auctions, in a statement as part of the auction announcement.

Gotham Baseball talked to Jerry Amernic, author of BABE RUTH – A Superstar’s legacy, a book about the enduring legacy of Ruth. The book explores the 2012 auction of another Ruth jersey that sold for $4.4 million. Amernic thinks this one could break all records.

Gotham Baseball: Ruth was the unquestioned biggest star in sports–maybe in all of pop culture–during his playing years, but pretty much all of his most well-known records have been eclipsed. What keeps him at the front of the collecting industry?

Jerry Amernic: It was the kind of person he was. He loved the fans and he gave back. And his life was so interesting, the proverbial rags-to-riches story that just happened to take place at the same time when America grew up as a nation. Anything that Babe Ruth signed, anything with his name, any item of clothing that he wore … is gold.

GB: What are some unique Ruth items that have appreciated the most in value?

JA: I like to use the example of the circa 1920 Yankee jersey that sold for $4.4 million at auction in 2012. That, by the way, is a Guinness World Record for an item of sports memorabilia. Try to peg how much that jersey has appreciated over time. It does better than the stock market, better than the Yankees as a franchise, and better than just about anything else. Last summer I spoke to the guy who bought it for his client and he said that jersey would probably fetch $10 million today.

GB: What were some of the interesting things you learned about Ruth from his daughter Julie Ruth Stevens and his grandson Tom when you met them?

JA: Probably the most interesting thing was the reason Ruth may not have been hired as a manager after his playing days were over. What was that? He would have advocated hiring black ballplayers which was a big no-no in a time of segregation. I have delved into this quite a bit and I think there is a lot to the story. Also, I don’t think the philanthropy side of Babe Ruth gets the appreciation it deserves. He really was the first celebrity philanthropist. The guy cared about people. In 2010 he was inducted into the World Sports Humanitarian Hall of Fame.

GB: There have been several outstanding books–including yours and last year’s by Jane Leavy–but no good movies, just two uninspiring ones. Why do you think that is?

JA: Hollywood often fudges the facts to make a film they think will make money. The first movie with William Bendix in 1948 was terrible as it painted Ruth as little more than a cartoon character. The second one in the 1990s with John Goodman—John Goodman playing Babe Ruth? How about Woody Allen playing Muhammad Ali?—was just as bad, if not worse. Ruth is not a cartoon, but actually quite a deep character with very human traits, both positive and negative. But the man was, and is, inspirational. I personally like The Sandlot, a movie about a bunch of kids who lose a Babe Ruth-signed baseball.