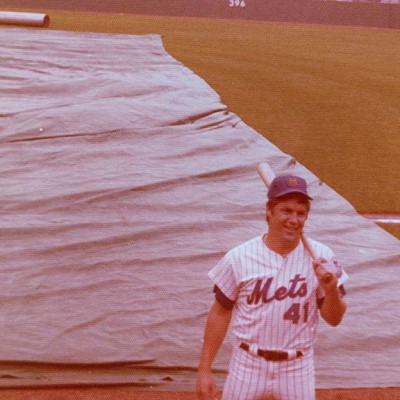 In the now nearly six decades since they first stepped on the field at the old Polo Grounds, the Mets have had a unique place in the New York sports scene. The team’s initial fan base, mostly comprised of rooters of two recently departed longtime franchises, yearned for something new while reaching back for something lost, putting it in sharp contrast with its neighbors in the Bronx. And while the Yankees had all that tradition and were in the late stages of a seemingly unending, nearly uninterrupted four-decade run of success when the newcomers hit town, the Mets had a spunk, reflected in their septuagenarian manager Casey Stengel, that won legions of loyal followers immediately.

But the team and its soon to be Queens home meant more than just wins and—in the early years, mostly—losses. As fans grew up with the Mets, the world was evolving rapidly, with the 1960s bringing about societal changes, reflected in pop culture both of the time and in retrospect today.

In The New York Mets in Popular Culture: Critical Essays (McFarlane & Company, 254 pps.), editor David Krell has collected a series of original pieces on a variety of topics that, while they relate to the team, would fit snugly in the old Deadspin, Salon, Mashable or any of dozens of smart, pop culture focused publications.

From baseball-centric essays on the early 1970s pitchers and slugger Dave Kingman to more broad topics like the team’s presence in films and one of its first sponsors, Rheingold Extra Dry beer, there’s something for everyone.

The stories all transcend the game to one degree or another, but just as no game or season happens in a vacuum, they also reflect how pop culture and the team were in some cases inextricably intertwined: the Miracle Mets inspiring a million we-can-do-its in sports and life; the Beatles taking the U.S. by storm, buoyed by their appearance at Shea Stadium; Mets fandom cheering for the city’s “other” team but giving it back as well as they can take it, a New York trait if ever there was one.

The essay topics are diverse, and though a little repetition within was inevitable, Krell has chosen well. Leaning towards the earlier history of the club, pieces on the formation of the team, the old Mayor’s Trophy Games and on the often imitated, never duplicated Mr. Met capture the formative years. The more interesting ones among the chapters connected more with something outside of the game, like the connection to music and the team cap and colors, rather than straight listings of, for example, films that the Mets appeared in or pitcher bios, but the majority of the pieces are well thought out, breezy reads.

Even seasoned fans will be in for a surprise or two, and for those newer to the game or the Mets, there is plenty to dive into.

“Even my players aren’t players,” Stengel said of his early Mets teams. Maybe they weren’t, but as “lovable losers” they helped form something special for their fans, wholly distinct from the Yankees and captured well in these pages.