As the last line of defense, baseball catchers and hockey goalies play the most perilous positions in their sports. Besides mental stress, they face speeding fastballs and flying pucks, coming at them like missiles out of a fog.

They are part psychologists, part acrobats, part traffic cops and full-time protectors of home plate and the goal crease, respectively.

And the mask is their most invaluable – and personal – piece of armor.

With a national spotlight on injuries and safety in sports, the Yogi Berra Museum & Learning Center in Little Falls, N.J., examines the fascinating history of baseball and hockey facial protection with a new exhibit: Saving Face: The Evolution of the Catcher and Goalie Mask to run from Wednesday through October 4.

The exhibit includes some of sports’ most iconic face wear, including Boston Bruins goalie Gerry Cheevers’ famed stitched mask, arguably the most recognizable goalie mask of all time.  Featuring some of baseball and hockey’s primitive facial protection, the exhibit also spotlights the masks of current NHL and MLB stars, including those of  Henrik Lundqvist of the New York Rangers and Buster Posey of the San Francisco Giants.

Ironically, baseball and hockey masks were inspired by another sport – fencing.  Fred Thayer, a Harvard baseball captain, in 1876 designed and patented the first catcher’s mask, adapted from ones worn by his school’s fencing team. About 50 years later, a Queens University goalie, Elizabeth Graham, adorned a fencing mask to protect her teeth, the first recorded instance of a goalie wearing a mask.

Of course, baseball and hockey have evolved through the years, and so have safety, style and technology. With widespread concern about concussions and other long-term health issues, Saving Face is designed to promote more awareness and education on sports safety.

The Museum will also be hosting an April 21 symposium, “Play Hard, Play Right: Making Youth Sports Safer” which is being sponsored by the Richard Becher Memorial Foundation for Safety in Sports and free to the public.  For more info about the exhibit and symposium, call (973) 655-2378. 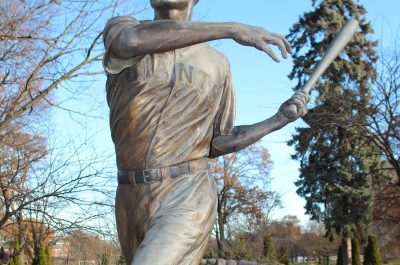 Irvin, Biggio Among N.J. Hall of Fame Nominees For 2021