After a disappointing weekend series against the Braves, the Mets will need to play nearly perfect baseball to continue playing into October. They may still be mathematically alive, but the numbers are not very kind to them.

Late in Sunday’s destructive loss to the Braves, a massive fire near Citi Field caused thick black smoke to billow around Citi Field. The symbolic coincidence of this is hard to ignore. Following the Mets 18-1 victory over the Blue Jays a couple weeks ago, it was generally surmised that if the Mets went 9-6 in the remaining 15 games, they’d have a legitimate shot at the postseason. The Mets have only won 3 of the 8 games played since that day. They have two remaining series this regular season: a 3-game series at Citi Field against the first place Tampa Bay Rays, and a 4-game series in Washington against last years champion Nationals. If that was the only challenge for the Mets in this final week, that would be tough enough. However, the schedule alone does not indicate the miracle it will take for the Mets to get a wild card berth.

For starters, there are the, um, starters. Or really, the lack of starters. When Jacob deGrom left last Wednesday’s game against the Phillies after 2 innings, there was a moment when I thought the Mets should at least consider ending the season then and there. That deGrom is the ace of the staff is obviously not news. That he ended up being the only dependable starting pitcher for the Mets this season is just the sad truth. Through 53 games, the Mets have used 10 starting pitchers. Wild as that number my seem, it’s also misleading. Twenty-one of those games were started by two Mets pitchers, deGrom (10) and Rick Porcello (11). Porcello’s starts have been mostly unsuccessful, although his 7-inning 10-strikeout performance against the Braves on Sunday provided some degree of hope for his next start.

Really though, let’s take a look at the 8 pitchers who started the other 32 games. Rookie David Peterson was touted as a reasonably reliable starter with a “middle-of-the-rotation” ceiling. After 8 starts, he’s lived up to those expectations in the best way possible. He’s been good enough that the Mets can at least expect to be kept in the game when he starts, and sometimes even have a good shot at winning. Steven Matz and Michael Wacha have started 6 games each. Do you remember when the Mets signed Wacha and people were wondering if it would mean that Matz would be dealt, or if there would be some manner of controversy as to which one would end up in the bullpen? Well, neither one of them has pitched well enough to inspire a race for the spot in the rotation. Wacha has a 1.68 WHIP, with opposing batters hitting .323 against him. He has a 6.75 ERA and has given up 7 home runs in his 28 innings pitched. He’s also been remarkably better than Matz, who has a 9.79 ERA, a 1.76 WHIP, a .333 batting average against, and has yielded 11 home runs in 26.2 innings. His last 4 starts have been disastrous, as he’s given up 25 earned runs in 14.1 innings (for a 15.70 ERA). Matz missed most of September with shoulder discomfort. Sadly, Mets fans can relate.

Seth Lugo has started 5 games for the Mets this year. Lugo is an interesting story, as he’s been a reliable reliever for a few seasons now while being vocal (in an honest and not trouble-starting way) about his desire to return to the starting rotation. Finally, after injuries and poor performances by most of the rest of the people on this list, manager Luis Rojas felt compelled to bring Lugo back. HIs first few outings were successful and invited questions like “why hasn’t this guy been starting all season?”. His last two outings have given the answer: an uneven 5+ inning outing in a loss to the Blue Jays last weekend, and an ugly 6 runs in an inning and 2/3’s against the Phillies last week. Still, while Lugo would make for a promising back of the rotation starter, it’s a shame the Mets thought that for a moment they had found their #2 guy.

Much like Lugo, Robert Gsellman started his career as a potential member of the Mets rotation before finding himself as part of the bullpen. Injuries and inconsistency have soured his once promising outlook, but there has generally been a modest level of hope that he could be a reliable arm for the team. After Gsellman’s first 3 starts, he had thrown only 7.2 innings and had given up 5 runs, but with each start he was showing some manner of improvement. That came to an abrupt halt. In his only September start, Gsellman gave up 4 runs in 1.2 innings, walked 4 and struck out none. After a similarly horrible relief outing a few days later, it was revealed that Gsellman had fractured a rib in that game and his season was done.

The other 3 Mets starts were from Ariel Jurado, Walker Lockett, and Corey Oswalt. The Mets picked up Jurado in an August 5th trade with the Texas Rangers. He started 1 game, pitched 4 innings, gave up 5 runs, and was sent to the alternate training site in Brooklyn. I realize that this alternate training site is a real thing this year and that every team has one, but to me it sounds like the story parents would tell their kids when asking what happened to their pet. “Mommy, Daddy, what happened to Ariel Jurado?” “Oh Darling, he was sent to the alternate training site, where he’ll be able to practice pitching whenever he wants.” In Lockett’s only start this year, he gave up 5 runs in 6 innings to the Phillies. It was an emergency start in place of deGrom who was suffering from some neck pains. Seems appropriate. Lockett did get the win in a relief appearance against the Yankees a couple weeks later. However, that would be his last game for the Mets, as they designated him for assignment right after the game to make room for some other players, and he was then picked up by the Seattle Mariners. Oswalt was once a relatively promising pitcher in the Mets farm system, and has had a couple cups off coffee with them this year and last season, and even had a carafe with them in 2018. That said, he has never really achieved much success in his 22 Major League games (as his 6.24 career ERA suggests), and his lone start this year did little to change that. He did only give up 2 runs in 4.1 innings in a no-decison against the Marlins, but it was not inspiring enough to keep him in the rotation. He made one appearance after that before missing almost a month with biceps tendinitis. He’s back with the Mets now, but unlikely that he’ll start any of the remaining 7 games.

In 1948, the phrase “Spahn and Rain, then pray for rain” symbolized the Boston Braves starting rotation limitations. For the Mets, it’s been more like “Jacob deGrom, then close your eyes and hope for the best.” It’s not as catchy as the Braves’ poem, still it’s no less accurate. It’s also how my father used to drive, but that’s another story for another time.

Coming into this year, the Mets expected to have Noah Syndergaard and Marcus Stroman team up with deGrom to make up a formidable top of the rotation. Syndergaard’s injury and Stroman’s injury and subsequent opt-out stopped that notion before it even started. Now the Mets have 7 games left. They’re going to have to win at least 6 of them. They’re going to have to do it with a patchwork pitching rotation. They may just have to rely on smoke and mirrors. Actually, given the smoke outside of Citi Field on Sunday, and the way the Mets have looked to everyone else all season, they may just have to rely on a miracle instead. 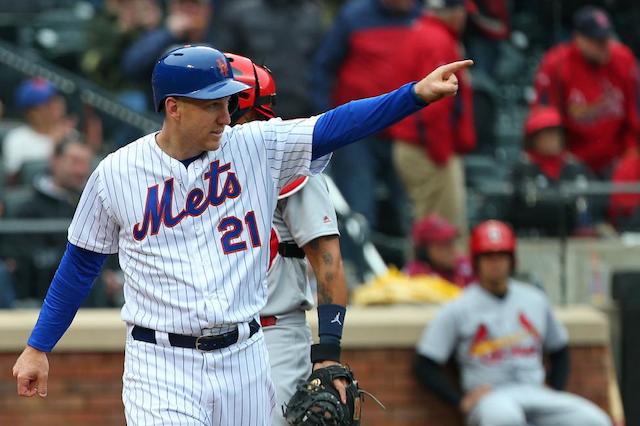