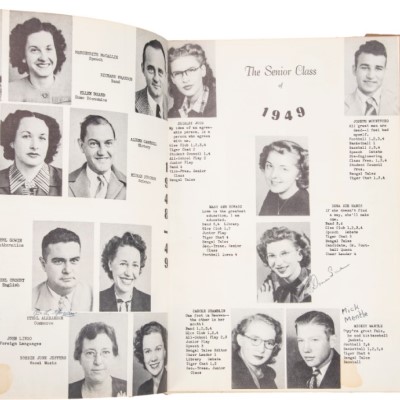 In the hobby industry, it’s often described that a certain item is “museum worthy” or a “museum piece,” and what Goldin Auctions is offering is the chance to own what could be a museum itself – and that is one of the childhood homes of Mickey Charles Mantle. The Mantle’s moved into the South Quincy home around 1934 according to what Mickey states in “The Mick.” The first few years they rented it from the Commerce Mining and Royalty Company that Mickey’s father Mutt worked at. Mutt purchased the home from the mining company around 1938 and years later traded it for a farm around 1944/1945, which would have been Mickey’s formative years as he was born in 1931.

The collection also features a 1949 Mickey Mantle Signed Commerce High School Senior Yearbook signed by the Mick. It’s inscribed “Mick Mantle” in block letters in black ink on page seven of his alma mater’s yearbook, over his portrait. In addition, there’s the Mickey Mantle Original 3×4″ Grammar School Photo – The Earliest Professional Mickey Mantle Studio Photograph up for grabs. The 2¼ x 3½-inch black and white portrait captures the youthful boy, recognizable even at that age as a charming character, in a dark open-collared shirt with light t-shirt, a broad smile and slicked-down hair with a part on the left. The earliest known professional Mickey Mantle studio photograph.

What Do We Want to See in Spring Training?