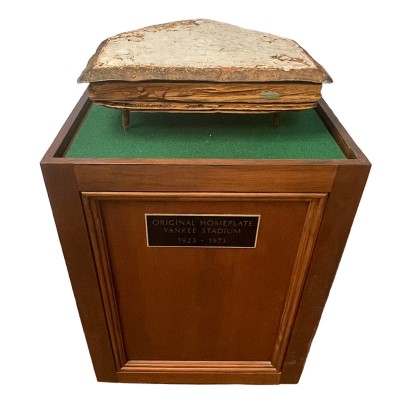 After being packed away for decades, one of Lou Gehrig’s final game used bats from the 1938 season and possibly during that year’s Fall classic will be offered at auction in March 2021.

Derived from the personal collection of Earle Combs and freshly graded and authenticated by PSA/DNA who scored the gorgeous Gehrig monument GU 10; this is one of the most important pieces of lumber ever offered from the Iron Horse.  Ordered in September of 1938, this is one of the final bats Gehrig used during his illustrious career and may have been used during the ’38 World Series and possibly during Spring Training in 1939.  The order date of this specimen points to September 7, 1938, the last month of his New York Yankees career.

The SCP Auctions’ Winter Premier Auction will be taking bids online through April 3 at www.scpauctions.com.

Besides the Lou Gehrig bat, the auction also features the original home plate from Yankee Stadium in 1923, a Babe Ruth contract from 1933 and a autographed team photo of the 1927 New York Yankees featuring “Murderer’s Row”.  The greatest team ever team photo features Babe Ruth, Lou Gehrig, Earl Combs, Tony Lazzeri, Waite Hoyt and the rest of the team.

Pictured in the team photo is Don Miller, who was a star left-hander at Michigan.  He joined the Yankees and manager Miller Huggins had him join the team for the remainder of the summer.  He pitched batting practice, played in exhibition games, played cards with Babe Ruth and was in the team picture.  Miller had everyone sign the 8×10 photo in black fountain pen.  He ended up playing the next three years in the minor leagues, never making it back to the majors.  The family of Don Miller discovered this rare piece and is putting the piece up for auction.

Hidden away for decades, the Combs family decided to reach out to SCP Auctions’ last month to inquire about the significance of the game used bat. The Combs family had mentioned that Earle and Lou had a very close relationship that transcended the ball field and that Gehrig had given his former teammate and then coach, Earle a bat sometime toward the end of his career. The bat immediately caught the attention of the experts at the auction house and has since been authenticated by leading game used bat expert, John Taube of PSA/DNA and has received the firm’s highest grade of GU10.  “SCP Auctions is honored to be able to handle one of the rarest and most valuable Lou Gehrig bats ever discovered,” said David Kohler, President of SCP Auctions.

Offered is a unique and highly significant 1933 contract from the greatest figure in baseball history signed and agreed to during the offseason after Ruth’s “called shot” and AL best .489 OBP in the 1932 season. Ruth’s contract leading up to negotiations was at $75,000 and was too rich in the eyes of Hall of Famer and owner of the Yankees, Jacob Ruppert who was keen on trimming down the hefty price tag. In the end, Ruppert’s negotiation tactics worked in the tune of a $52,000 final agreement between the GOAT and the world-famous ball club. Although the number was a significant reduction from the prior deal, Ruth would still be making more than double than his fellow Yankee legend, Lou Gehrig.

The bat will be one of the focal points of a large annual Winter/Spring premier auction of sports cards and memorabilia conducted by SCP Auctions. 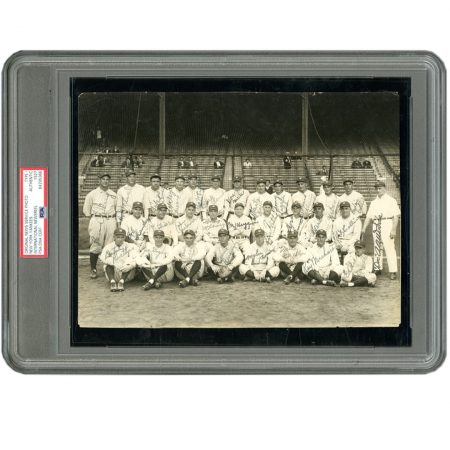