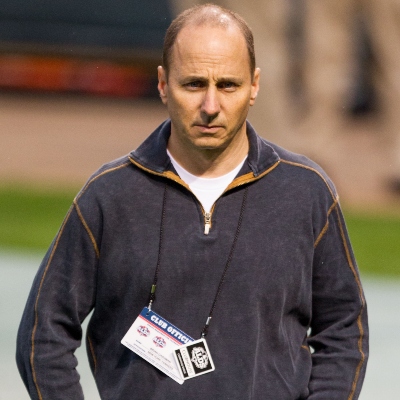 For the first time since 2002, the New York Mets’ baseball operations department is being run by professionals.

The Yankees, at least since 1990, have as well. The late Gene Michael is most responsible for that change, taking over the club when principal owner George Steinbrenner was banned for his role in the Howie Spira scandal.

No longer does either team’s front office operate at the whim of defensive, thin-skinned, passive-aggressive, and unqualified family members. Given that new normal, it is very possible that we could see a major trade between the Mets and their crosstown rival New York Yankees, maybe even as soon as this year’s deadline.

Both the Yankees and Mets have entered this season with high expectations, and each team has the wherewithal to add whatever pieces it might need to accomplish those goals.  But now, if they see a need in each other’s club, the final obstacle, Jeff Wilpon, has been removed.

They were referring to the Dec. 2001 trade that sent David Justice from the Yankees to the Mets for Ventura. Justice would be dealt a few days later to Oakland and drive in 49 rubs for the “Moneyball” A’s for relievers Mark Guthrie and Tyler Yates. The Mets would get a serviceable (and only one) season from Guthrie, a terrible 2003 from Yates (6.36 ERA in 46 2-3 innings), and would have to watch Ventura have an All-Star season in the Bronx, hitting 27 homers and 93 RBIs. Meantime, the Mets would implode in 2002, ill-advised trades for Mo Vaughn and Roberto Alomar, free-agent busts Jeromy Burnitz and Roger Cedeno cost Bobby Valentine his job (but not Steve Phillips, who eventually got canned as well).

The Wilpons loved Ventura, he was their kind of player and believed GM Steve Phillips, when he told them Ventura’s knee wouldn’t hold up to another season.  Phillips took the brunt of the criticism for that deal, but so many other things went wrong that season, it isn’t remembered as being that big of a deal.

On the contrary, we’re told that Jeff in particular hated the deal and told his father that the Mets should avoid making deals that could embarrass the organization.  “We were told to forget making any kind of deal like that with the Yankees ever again,” said our aforementioned former Mets front office employee.

The two teams have made a few minor transactions since then, but have avoided any discussions that involved any major players. A few columnists over the years have often thrown around Jake deGrom’s name in connection to the Yankees, but it was always speculative (and if you ask me, kind of clickbait). In truth, there was zero chance of any kind of deal that could potentially backfire.

That could change this time around, as I’ve heard that the Yankees and Mets won’t rule out making a deal with the other if the fit is there.

In years past, we’ve heard that there was “no chance” the Yankees and Mets would make a deal, but that feeling was always one-sided (from the Mets).  Brian Cashman won’t ever hesitate to pull the trigger if he feels a player on the Mets roster could help him. Now, the same could be said about Sandy Alderson and interim GM Zack Scott.

Will the Mets and Yankees made a deal at the deadline? I’m not sure, but I do know now that’s it’s more possible than it’s ever been.

The fans are gonna hate it, but they are going to love arguing about it. Buckle up.

SI Yanks Fall in Game One of NY-Penn League Championship