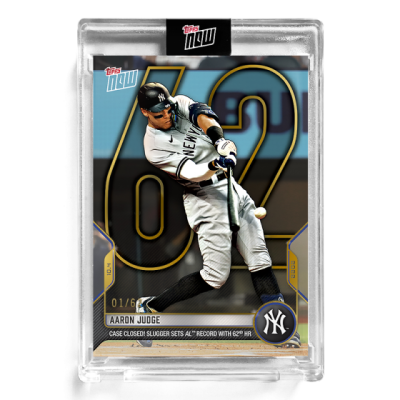 Aaron Judge’s A.L. record setting home run display was not just a boon to the Yankees — and his impending free agency. It was also a big hit with collectors, as the Topps NOW card depicting his historic 62nd blast of the season enticed fans to purchase 91,685 of the base card, the most ever in the seven-year history of Topps NOW, which depicts the greatest moments and milestones from Major League Baseball almost as soon as they happen, with physical cards limited to the number ordered within 48 hours of issue.

In all, the five top Judge cards accounted for a total of 176,243 cards issued, more than half of all the base cards (330,699) produced through the regular season (112 individual cards).

Fans can continue to purchase Topps NOW cards throughout the MLB playoffs at https://www.topps.com/toppsnow.