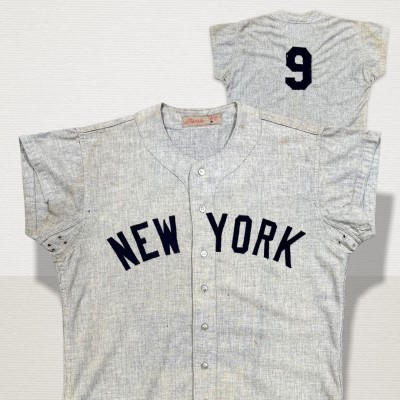 Yankee immortal Roger Maris broke Babe Ruth’s home run record with 61 home runs  during the 1961 season. Maris was also one of the finest players of his time, appearing in more World Series than any other player of the 1960s. In 1960, his first year with the Yankees, Maris was tops in the league with a .581 slugging percentage and beat out teammate Mickey Mantle for the MVP. Maris helped usher in a new Yankees dynasty of five consecutive pennants and won back-to-back MVP awards in the 1960 and 1961 seasons.

This all-original road flannel with incredible wear has been photo-matched to Game 6 of the 1960 World Series in a picture with Maris, Mickey Mantle and Clete Boyer holding up their fingers in the clubhouse. The jersey has also been photo-matched to multiple images from the 1961 season including the game in which Maris hit his 59th home run of his historic season on September 20th in Baltimore before hitting his 60th round tripper at home.

Bidding begins at $25,000. Additional information on Maris’ jersey can be viewed at https://www.greyflannelauctions.com/Roger_Maris_NY_Yankees_1960_World_Series___1961_Ho-LOT48653.aspx

This absolutely stunning Reach manufactured OAL Harridge baseball has been signed by the iconic Babe Ruth on the sweet spot with a blue steel-tip fountain pen. PSA/DNA has authenticated the baseball with the autograph grading a 9 and the baseball a 7 with an overall grade of 8.5. The stamp is lightly faded. You would be hard pressed to find a better Ruth single-signed baseball.

Bidding begins at $25,000. Additional informational on the Babe Ruth signed ball can be found at https://www.greyflannelauctions.com/Stunning_Babe_Ruth_Single_Signed_OAL_Baseball__PSA-LOT48650.aspx

The 13-year career of New York Yankees center fielder Joe DiMaggio is as accomplished as any player in Major League Baseball history. DiMaggio was named as an American League All-Star 13 times and three times was voted the American League MVP. The Yankees won nine World Series championships during that span and DiMaggio was named to the Major League Baseball All-Century Team. DiMaggio hit safely in 56-straight games in 1941 and the record still stands today and in the modern era, no baseball player has come within 10 games of the feat.

This original cap was gifted directly from DiMaggio to our consignor’s grandparents who were friendly with the DiMaggio family. Joe DiMaggio was invited to many dinner parties hosted by our consignor’s family member who was a bank executive in Hollywood. Over the years they became quite friendly and DiMaggio gifted them this cap as a thank you for hosting the parties. This cherished keepsake from the family has been handed down through generations and has not seen the light of day for the past 25 years as it was securely stored in an attic. This cap is being offered publicly for the first time.

Bidding begins at $10,000. Additional information on the cap can be viewed at https://www.greyflannelauctions.com/Circa_1937_Joe_DiMaggio_Rookie_Era_New_York_Yankee-LOT48655.aspx

The 59th edition of the fully illustrated catalog detailing all lots is now available to view online at www.greyflannelauctions.com Bidding will close on Sunday, November 13, 2022. For additional information on any item in the auction or to make an appointment to inspect auction goods in person at Grey Flannel’s Scottsdale showroom, please call 631-288-7800 or email info@greyflannelauctions.com

HOF’s Legendary Voices From On And Off The Field