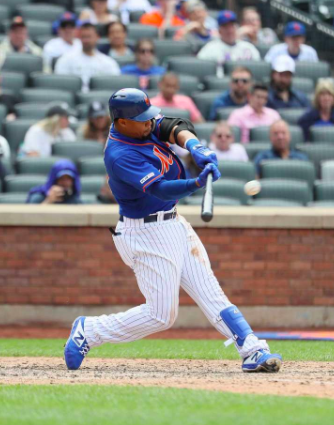 The Mets have seven players on MLB’s Injured List at the moment. Historically, it’s at this point in the season, and at this point in this post, when I’d feel compelled to try to balance the notion of “you can’t blame losing on injuries” with the concept that even a team with reasonable depth would struggle with losing a few key players. That’s not what this is about today, though. This past week the Mets dug deep into their own organization, and even some recently available free agents, to pull together enough coverage to enjoy a 6-1 home stand.

The Mets got through April and May relatively unscathed in the health category. Some bumps, some bruises, but nothing like we’ve accustomed to seeing in recent years. The last few weeks, however, have been a different story. A concussion (Michael Conforto), bulging disc/whiplash (Brandon Nimmo), a quadriceps injury (Robinson Cano), some hamstring issues (Jeff McNeil), and suddenly a team that was already struggling had some new, albeit familiar, challenges.

Let’s keep in mind that the key word from this past offseason was “depth”. Granted, a key piece to that depth, Jed Lowrie, has worn his uniform less this season than I did in the week I attended Mets fantasy camp (home and away uniforms, actually). In fact, the longer we go without seeing Lowrie actually play for the Mets, the more he reminds me of that character in the 1987 “classic” Summer School, Jerome Watkins, who missed the semester because his zipper got stuck when he went to the bathroom on Day 1. Similarly, there was some discussion as to whether or not we’d see the Mets $30 million version of Jerome Watkins, Yoenis Cespedes, at some point this season. That question has been answered, as Cespedes had surgery on his ankle after a bad fall at his ranch this past week. There are plenty of fairly obvious jokes going around about Cespedes and his mysterious fall, and I’m pretty sure that none of them are as entertaining as the actual story, whatever that may be.

The point is that the theme for this year’s team was put to the test this past week, and some interesting and notable things developed. Two players hit home runs in their first Mets at-bats (Rajai Davis and Aaron Altherr). They were actually 2nd and 3rd players to accomplish that feat this season (Cano was the 1st). Coming into this season, only 9 players in Mets history had done it. In case you haven’t heard the story about Davis’ day leading up to the home run, it’s worth checking out. The short version is that he was in Lehigh Valley, Pennsylvania, when they called him up, and he had to take an Uber to Citi Field, showed up in the third inning and hit his huge 3-run HR in the 8th. On Sunday, with Conforto coming off the IL, the Mets designated Davis for assignment. He may end up returning to the Mets minor leagues, or he may sign on with another team. I hope wherever he goes, he gets a plane ride, or maybe a limo. Two days later, Altherr, who coming into this season had played his entire career with the Philadelphia Phillies, joined the Mets over the weekend and hit what appeared to be a key home run in a game they eventually lost to the Tigers.

Most impactful of all these replacement Mets, however, is Carlos Gomez. Again, his story is probably familiar to most people – he came up with the Mets in 2007 and showed enough raw talent to earn him a featured role in the Mets trade for Johan Santana. While it took him some time to grow into the player his teams hoped he would be, Go-Go (as his teammates like to call him) eventually became an All-Star in 2013, and again in 2014, and even earned a Gold Glove award after the 2013 season. In 2015, he was close to returning to the Mets in a now famous trade that never happened with the Mets eventually ending up with Cespedes and a trip to the World Series. So, when the Mets re-signed Gomez during this past offseason, it made for a nice enough anecdote. Now, with the team hurting, in many ways, and the recent release of Keon Broxton, Gomez returned to Queens to add some life to this team. And it kind of worked. Like the aforementioned Davis and Altherr, Gomez also had a clutch 3-run HR this past week, and did little else with the bat. Really though, from most accounts, it’s Gomez’s attitude that seems to have breathed life into a team that was struggling to survive.

And in case more injuries come, or the need arises for some other reason, the Mets signed 3-time All-Star, 2-time Silver Slugger, outfielder Matt Kemp, as well as 2-time All-Star pitcher Ervin Santana, this past week. Like Jed Lowrie, I’m not sure when we’ll see those guys play for the Mets, or even if we’ll see them play for the Mets, but unlike recent years, the Mets will be relying on these guys to fill in missing holes, and not to become the centerpieces of the lineup. I hope.

It’s also important to mention the role that Dominic Smith and J.D. Davis have played on the Mets this past week and the year in general. When the Mets traded for Davis, I was a little confused. I didn’t really understand what he brought to the team that was different from Todd Frazier. And while I eventually understood the Mets approach to this season and having this team be as deep as it could be, I still didn’t see how Davis was the answer to that question. Well, to date, Davis has played in over 80% of the team’s games, and has come up big in some moments. He’s also played left field in 8 games, a position he only played 5 times in his major league career before joining the Mets. Similarly, Dominic Smith continues to do whatever is asked of him. He was briefly sent to the minors a few weeks ago, which made sense from a contractual standpoint and was not a reflection of his level of play. Shortly afterwards, the Mets sent a player to the IL, and Smith returned. While Rajai Davis, Aaron Altherr, and even Carlos Gomez, are essentially band-aids on a large wound, J.D. Davis and Dominic Smith are really the ones who are providing depth to this Mets roster.

Yes, it’s true, while the Mets can celebrate the recent home stand victories, we can’t overlook that most games were nail-biters, and all were against sub-par teams. Still, the depth on this Mets team is enough to at least consider that maybe things will be different this year.

Monday Mets: How Do They Manage