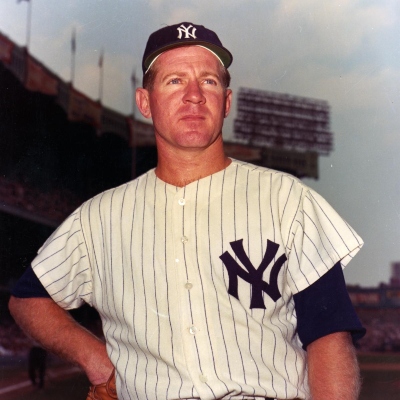 “To think when I was 21 years old, I’d be playing with DiMaggio and Berra, against guys like Stan Musial and Roy Campanella, it’s just something I can’t fathom. It’s just been great.” – Whitey Ford, at the 1974 Hall of Fame Induction Ceremony

Edward “Whitey” Ford was the big-game pitcher on the great New York Yankees teams of the 1950s and early-1960s. Catcher Elston Howard nicknamed Ford “The Chairman of the Board” for his ability to manage his fielders and control the game. Ford’s lifetime record of 236-106 gave him an astounding .690 winning percentage. T

“Whitey Ford anchored the great Yankees teams of the 1950s and ’60s and was the winningest pitcher in the team’s storied history. A six-time champion and the owner of the most World Series wins by any pitcher, Whitey loved the Hall of Fame, Cooperstown and the legacy that he and his teammates built during the game’s golden era. We extend our deepest condolences to his family and we will celebrate his life in Cooperstown forever.” – Jane Forbes Clark, Chairman, Baseball Hall of Fame

Hall of Famer Mickey Mantle: “I don’t care what the situation was, how high the stakes were – the bases could be loaded and the pennant riding on every pitch, it never bothered Whitey. He pitched his game. Cool. Crafty. Nerves of steel.”

Manager Ralph Houk, at Whitey Ford’s retirement announcement: “Losing Whitey is sort of losing a part of myself. He has been a great part of any success I’ve ever had.”

On the web: Visit www.baseballhall.org/hall-of-famers/ford-whitey to view Whitey Ford’s Hall of Fame plaque and a video tribute.