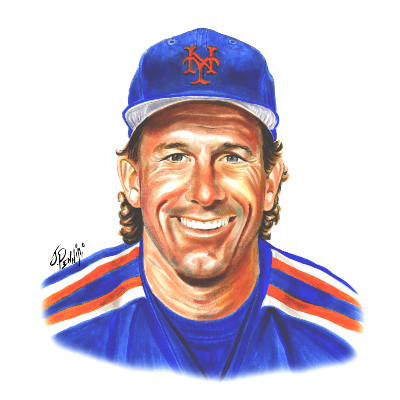 During his remarks on Keith Hernandez Day, Mets legend Mike Piazza introduced Hernandez by noting that he could feel the presence of “No. 8” (Gary Carter) during the ceremony.

No one else, even Hernandez, mentioned Carter’s name, but if you’re asking me who should get their number retired next, it’s Gary Carter.

Hernandez taught the young Mets how to win, but it was Carter who brought the team to the mountaintop with his bat and with his consummate skills behind the plate, shepherding the team’s young pitching staff led by Dwight Gooden.

It’s hard to remember a more exciting time to be a Mets fan.  Following two consecutive Rookie of the Year campaigns by Darryl Strawberry and Dwight Gooden and an unlooked-for 90-win season by Davey Johnson’s 1984 club, the Flushing Faithful was thinking World Series in 1985 for the first time in a long time.

And true to form, the Kid delivered the goods immediately

Carter’s Opening Day game-winning home run off of St. Louis reliever Neil Allen, a former Mets All-Star who had been traded for Hernandez two years earlier, raised the stakes at Shea Stadium to epic proportions.  The drama of the blast (we didn’t call them walk-offs just yet), was matched by the upraised fist and the first of many passionate curtain calls “Kid” would be asked to grant for the rest of his tenure as a Met. No one did a curtain call quite like Gary Carter. Pointing to the right side of the Shea Stadium crowd, then to the left, punctuated by a “YES!” fist pump, it made the fans love him even more.  It also drove opponents nuts. Mike Lupica, the award-winning sportswriter from the NY Daily News, didn’t really understand the hate back in 1986, especially for Carter,

“Gary Carter? Sure. Carter is a ham. He always has been. It`s his nature, he can`t help himself. Home runs send him into this high-five frenzy. This is news? This is bush? Carter waited a whole career to get a stage like Shea. He`s supposed to be Ted Williams all of a sudden?”

His best year for the Mets would be that 1985 season, but while the Mets would win 98 games, they would lose a tightly-contested NL East race to the Cardinals.  Carter would be an All-Star from 85-88, but injuries and the team’s dependency on both his cleanup bat and handling of the pitching staff would wear on his body.  It was the last days of baseball before PEDs, and only through sheer will was Carter able to battle through. He was already 31 when he donned the blue and orange, so a long stint in New York was never in the offing. His knees had already been surgically repaired twice before coming to Gotham and would be worked on three more times before he left.  But it always was the quality of his Mets career that is remembered, not the quantity.

Gary Carter deserves his day in the sun, and it’s time the Mets did the right thing.