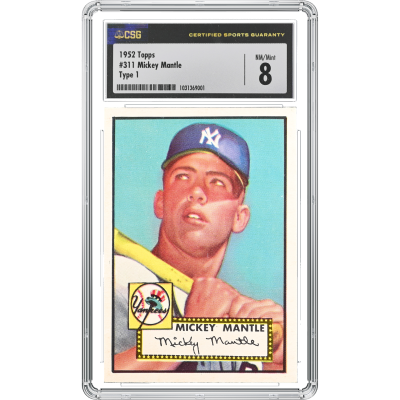 Certified Sports Guaranty® (CSG®) is thrilled to announce that it has just certified two examples of the iconic 1952 Topps #311 Mickey Mantle card, one of them valued at more than $2 million! Graded CSG 8, it is the most valuable card that CSG has certified since it launched in early 2021.

Fewer than 20 are graded higher out of about 2,000 in the world, including one that sold for $12.6 million in August 2022, setting a record for most expensive sports card at auction.

“It was an honor to authenticate and grade what is one of the most valuable cards in the hobby,” said Andy Broome, Vice President of CSG. “This resounding affirmation from the collecting world follows CSG’s monumental efforts to quickly become one of the market’s leading third-party authentication, grading and encapsulation services. We look forward to seeing more cards of this caliber.”

In addition to the Type 1 example graded CSG 8, CSG also certified a Type 2 example CSG 4.5. A card with that grade would be expected to sell for about $100,000 at auction.

On its certification label, CSG attributes the type of the Mickey Mantle #311 card. Minor differences, such as the direction of the seams on the baseball on the back of the card, distinguish the two types. To learn more about the differences, click here or watch the video below.

The Mantle card stands at the pinnacle of the sports collecting world for many reasons. In 1952, Mantle’s All-Star career had just begun, and the world of sports cards was being revolutionized by a newcomer known as Topps Chewing Gum, Inc. Topps’ ambitious 1952 set is widely considered to have set the framework for modern sports cards. Unfortunately, it did not sell well, resulting in an inglorious fate for high-numbered cards like the #311 Mickey Mantle. Legend has it that New York City-based Topps loaded unsold cases of these cards onto a barge and sent them to a watery grave.

Mantle played for the New York Yankees from 1951 to 1968, when they won seven World Series championships. He won the Triple Crown in 1956 (leading in batting average, home runs and RBIs) and the Gold Glove Award in 1962. Many consider the Hall of Famer to be the best switch hitter in history.

Increasingly, collectors are turning to CSG to certify some of the greatest sports cards in the hobby. CSG also holds the distinction of being the fastest third-party grading service to certify more than 1 million cards. Among the great cards that CSG has graded are:

For the latest company updates and to see a variety of fantastic cards, follow CSG on social media and sign up for our monthly CSG Score eNewsletter.