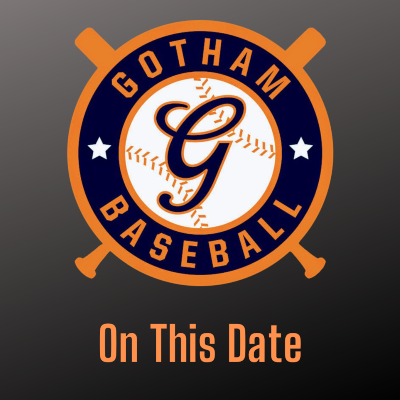 New York Giants centerfielder Casey Stengel smacked a home run in the 10th inning to beat the Pittsburgh Pirates, 2-1 at the Polo Grounds. The “Fordham Flash” Frankie Frisch had the only other run-scoring hit, an RBI single in the first inning. Art Nehf pitched all 10 innings for the New Yorkers, scattering 11 hits, walking two, and striking out one. (The Giants would win the 1922 World Series, beating the rival New York Yankees for the second year in a row).

Charles “Red” Ruffing of the New York Yankees sets an American League record for pitchers by piling up 10 total bases. Ruffing hits two home runs as part of a four-hit day, helping the Yankees to a 15-4 crushing of Cleveland. He also pitched a complete game for the win. (The Yankees would beat the New York Giants in the 1936 World Series).

Brooklyn first baseman Gil Hodges’ RBI single in the top of the ninth at Wrigley Field held up, as 23-year-old Don Newcombe finished off the Cubs in the bottom half of the inning, giving him a 2-1 complete-game win. Brooklyn improved to 34-22 on the season, giving them a 2-game lead over the St. Louis Cardinals. (The Dodgers would win the NL pennant, but lose to the Yankees in the World Series. Newcombe would finish his first season in Brooklyn with a team-best  17-8 record and win NL Rookie of the Year).

After completing the first 1,000 games in franchise history with a winning percentage of .332, the Mets compiled a 517-482-1 record in their next thousand contests. During the span, Tom Seaver won 12% of the team’s victories, New York would win two National League pennants, and a World championship. Then, Joan Payson died in 1975, and M. Donald Grant traded Seaver and ruined everything until Nelson Doubleday saved the Mets in 1980.

After a 9-6 victory against the Angels in the first game of a West Coast road trip, the Mets fire manager Willie Randolph, pitching coach Rick Peterson, and first base coach Tom Nieto, shortly after 3 a.m. Eastern time. The team’s 18th manager, who compiled a 302-253 record in 3+ seasons with New York, will be replaced by bench coach Jerry Manuel on an interim basis until the end of the season.