Lots of people are rooting for the New York Mets to bounce back from three straight seasons of excruciating painful baseball. Unfortunately for this rabid and loyal fan base, which has been marginalized, ignored and lied to for most of the last 20-plus years, 2010 is not going to be “next year” at Shake Shack Field.

COO Jeff Wilpon: After the debacle of 2009, Jeff Wilpon and GM Omar Minaya (and for some inexplicable reason, VP Dave Howard) appeared on their flagship station, WFAN, in NY to discuss/explain the dismal year and what to expect for 2010. In an excellent recap by Amazin’ Avenue’s Eric Simon, Wilpon maintained that he would give Minaya “the resources he needs to put a championship team on the field.”

The truest – and most frightening to some Mets fans – thing to come out of the Wilpon ownership was Fred Wilpon’s “we will own the team for generations” statement in the early part of Spring Training.

GM Omar Minaya: The quick fix he ushered in 2005 worked until Game 7 of the 2006 NLCS. Since then, not much has panned out for Minaya. Barring a miracle, Minaya will be looking for a job come October (or sooner), and given the Wilpon M.O. for muzzling former employees with complicated and mind-altering non-disclosure agreements, we won’t even get the chance to read “Full Autonomy, My Ass.” Of all the Mets FO people I have dealt with in the last 10 years, Minaya has been one of the true gentlemen this sport has to offer. But far too much has gone wrong during his tenure to completely absolve him of creating his own reality.

Manager Jerry Manuel – The moment the beat guys started writing about how he read Gandhi I knew this wasn’t going to work out. I’ll be the first one to tell you that the ego is stroked when he says, “That’s an excellent question…” (Much better than his predecessor’s “What do you mean by that?”), and his agreeable, warm nature was a marked change from Willie Randolph. But Randolph’s crabbiness and paranoia is more understandable now, considering the conditions he was forced to work under, his lack of managing skill non-withstanding. There’s very little difference between Manuel and Randolph; mediocre managing with a smile instead of a scowl is still mediocre managing. Like Minaya, the unemployment line beckons, but it’s likely that Manuel will be asked for his playbook sooner rather than later.

The Bad: Santana can’t pitch every day, and every single starter after him is a question mark. Easy to pull for guys like John Maine and Mike Pelfrey, but Maine hasn’t been the same since Rick Peterson left. Though vocal about his disconnect with the ex-CEO of Pitching, Big Pelf is still searching for his 15-game winning form under The Jacket. For all of his past work as an excellent pitching coach alongside longtime minor league skipper Ken Oberkfell, Dan Warthen has been unable to solve either guy.

The Ugly: Oliver Perez remains a very expensive enigma. Mets are stuck with him and he’s useless in the bullpen, so they have to light a lot of candles and pray that he’s more Mike Hampton and less Pete Falcone in 2010. That’s one hell of a business plan, right?

The Good: Jon Niese has a chance to be a nice story, and should just be handed the fifth starter job already. He has options, so who knows what the Mets will decide. None of the other options are very promising.

Having an All-Star closer is great, but when the eighth inning is about to be handed to a 20-year old who won’t (and shouldn’t) be throwing back-to-back days or an untested Japanese import who hasn’t thrown an inning of pro ball in the United States, color me a little less-than-confident. Jenrry Mejia is the team’s best starting pitching prospect to come along since Scott Kazmir. Let’s not compound that stupidity by force-feeding Mejia in the majors – and as a reliever, no less — because Minaya wasn’t savvy enough to find someone better than Kelvim “I have been hurt for two years” Escobar to be the setup guy.

Ryota Igarashi is already tinkering with his delivery, and based on the Mets’ lack of success in scouting Pacific Rim players, I’ll wait and see before anoint him as a solution. Kiko Calero can help, if healthy, and Pedro Feliciano is solid, but neither is what you would call shutdown guys. Let’s face it, if they were, they’d be pitching somewhere else. Shawn Green is now Chad Bradford-lite and Bobby Parnell is a forgotten man after “failing” to prove Minaya and Manuel right last year.

A rotation that lacks consistency and length, with a bullpen full of question marks. That’s the mark of a championship-caliber club!

The Infield – Who’s On First, What’s On Second, Wright’s On Third: The right side of the infield is probably

the worst in the division, and while Daniel Murphy is a very hard-working kid, we all know he’s a bookmark for Ike Davis, so delaying the obvious seems silly. Playing for Buffalo will do little for Davis, and giving him depressuredized MLB time than make him wait is strange, considering how the Mets are dealing with Mejia. Something tells me the Mets telling all of us how Murphy was the next Don Mattingly is the primary reason. Even if Murphy hits, Mets need power and solid defense, and he provides neither. Mike Jacobs getting the backup job is a nice story, because he’s a nice guy with good power, but Mets fans and Manuel seem to think that Chris “Don’t Call Me Darren Reed” Carter is the guy who should get the job. We all know why, right?

For the Mets to full take advantage of the player Murphy truly is; an upper echelon utility guy, they’d be better served sending him to Buffalo to play for Oberkfell, who’ll be the perfect guy to cultivate him. Let’s face it, the Mets gave Murphy a six-game trial at 2B in the Arizona Fall League two years ago, he got hurt and they panicked and abandoned the experiment. Now, it seems Murphy need to become Super Joe Part Deux to even stay in the organization past 2010.

I argued last season that Mets should have given – since it was a lost year anyway – Ruben Tejada some MLB time at SS. Now with Reyes out indefinitely, Manuel seems determined to make Alex “The Edge” Cora the starting SS, saying that the rookie is “untested”. Well, Tejada is already a better defensive player, and Cora isn’t exactly Derek Jeter at the plate, so what’s the motivation here? Oh, that’s right, a quick start.

Luis Castillo is the Mets everyone loves to hate, but to be fair; he did everything the Mets asked of him in 2009. He showed up to ST last year in great shape, he stayed relatively healthy all year and was consistent at the plate. However, his range, and speed on the basepaths, which are huge keys to his overall game, have all but disappeared. Like Perez, he will be here until his contract expires, or he will be mercifully dealt away if the Mets can ever find a taker.

David Wright is coming off the worst year of his career, and might be the worst Gold Glove third baseman in the history of the award. But he is determined to bounce back, and of all the question marks the Mets have this season, the most likely to happen is Wright returning to his .300/30/100 All-Star form.

I’m still figuring out why Gary Matthews Jr. is a Met.

The rest of the outfield, even with Carlos Beltran being out, is the least of the Mets problems. If the hole in Jeff Francouer’s bat returns, Fernando Martinez will finally get his chance to play in NYC. Angel Pagan can hit, run, throw and field well enough to be a solid fourth outfielder, while filling in as a leadoff hitter until Reyes comes back. Ticket seller and All-Star Jason Bay will be just fine as the cleanup hitter, but Mets are hoping their doctors are smarter than Boston’s. (Insert snarky comment here).

The Mets have a nice tandem in Rod Barajas and Henry Blanco. Good receivers with defined roles and already have shown leadership and great communications skills, critical to a pitching staff’s development during the course of the season. No complaints here. Really.

Prediction: Mets have too many question marks to be considered a real contender for the playoffs. But it’s a long season, and a lot can happen between now and October. Maybe the Mets are due for a miracle. 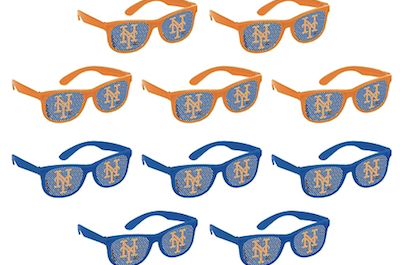 Monday Mets: Are You Ready for the Summer?