“Sal Maglie will never be elected to the Hall of Fame, unless there’s a Hall of Fame just for pitchers whom you wanted to have the ball in a game you had to win.” – Bill Madden, NY Daily News

For the first four years of his professional career, Sal Maglie wasn’t much of a presence, a prospect or a pitcher.  The Cleveland Indians signed him at age 21 in 1938, shuffled him off to the Tigers in 1940, who sent him all the way down to Single-A Elmira.  Given a chance to pitch on a regular basis for the first time in his career in 1941, he responded with a record of 20-15 with a 2.67 ERA over 270 innings.  His reward? He was left unprotected by the Tigers, who lost him to New York Giants via the Rule V draft.

At 25 years of age, Maglie, who had grown frustrated with professional baseball’s lack of commitment to him as a starter, nonetheless had a solid year for the Double-A Jersey City Giants, going 9-6 with a 2.78 ERA in 50 games, only seven of which came is a starting role.  One could say he only had himself to blame, as his inability to muster a respectable K/BB ratio (a dreadful .044 in his minor league career up until that point) was his main culprit,

Furious with baseball, perhaps more furious with himself, Maglie would quit pro baseball,  returning to his native Niagara Falls to work at a defense plant, as it paid better than minor league baseball.  That feeling would last two years.

Feeling that he still had something to prove, Maglie contacted the Giants, and they assigned him to Jersey City again. He responded with a 3-7 record with a 4.07 ERA, very below-average numbers for a 28-year old reliever trying to make it back into baseball.  But because of the manpower shortage caused by ballplayers being drafted, fighting and many still overseas in World War II, the big club needed bodies. Maglie finally get his shot at the bigs. In 13 games, 10 of which were starts, Maglie posted a 5-4 record with a 2.35 ERA and a miniscule 1.15 WHIP. His K/BB ratio was still below average, but it was better, and he also tossed three shutouts in the mix.  It was a promising start, partly because it was Maglie’s first brush with the man who would change his life, Giants pitching coach Dolf Luque.  It was Luque who would drill aggressiveness and intimidation into Maglie’s game, and according to Judith Testa, author of Sal Maglie: The Demon Barber, would “transform him from a marginal wartime hurler into one of the top pitchers of his time.”

To listen to an interview with Judith Testa about her Sal Maglie biography, click here

It would take a long five years before anyone would notice, because Maglie would make the incredibly costly choice of joining the outlaw Mexican League.  He would finally learn how to become a dominant big league pitcher, but he would have to wait a long time before he could prove it.

His old pitching coach Luque would serve as his manager in Mexico for two years, but even the expert tutelage of his mentor could not make the awful conditions in Mexico bearable.  For the next three years, Maglie would alternate a whole variety of realities; he would spend a few months barnstorming with a bunch of ex-big leaguers,  move back home and buy a gas station, and then finally pitch again, this time in Canada.

The last time Maglie wore a Giant uniform, former Polo Grounds legend Mel Ott was the skipper.  A far better player than manager, the man who hit 511 career homers was also known as “the nice guy who would finish last”. The fellow who pegged him with that moniker was his eventual successor, Leo Durocher.  It was Durocher who would be Maglie’s manager when the right-hander, now a grizzled 33 years old, rejoined the team after Commissioner Happy Chandler lifted the ban against those big leaguers who had jumped to the Mexican League.

However like Ott, Durocher mostly ignored Maglie the first couple of months or so he was with the club.  Then he took the mound against the Cardinals on July 21, tossed an  11-inning complete game, and for three of the next four seasons, he would become one of the more dominant – and most feared — pitchers in all of baseball.

The guy who pumped gas in Niagara Falls was now instilling fear in the hearts of his opponents – and their fans. Acclaimed writer Robert Creamer, who chronicled Maglie in Sports Illustarted in 1951, put it best:

“(Maglie) hovers over the Borough of Brooklyn like the angel of darkness. Small children are cowed into obedience by the mention of its name, strong men pale and women weep.

“The Barber?” the Brooklyn Dodger fan asks fearfully, looking over his shoulder. “Is he pitching tonight? We never beat him. Never.”

This is legend, of course. Salvatore Anthony Maglie of the New York Giants (for indeed it is he) never scared a child to sleep, never made a woman weep and never beat the Dodgers every time he faced them, although his margin of superiority—23 victories over Brooklyn to only 10 defeats—is remarkable. But his undeniable effectiveness, his grim shadowy appearance, his obvious relish of the challenging job facing him each time he pitches against Brooklyn, have given him an aura of invincibility and made him a major character—hero and villain both—in the tremendously dramatic pageant of Dodger-Giant baseball.

He would finish the 1950 season 18-4, putting together a string of 45 consecutive scoreless innings along the way.

One of the young boys who Maglie did not frighten was named Ron Healey, who shared this story:

In the summer of 1951, I was walking along Bedford Avenue in back of Ebbets Field, home of the Brooklyn Dodgers. Behind the right field fence. I noticed a window open which normally, was always closed. Little did I know, it led to the bathroom of the visiting team. That night, the Dodgers were playing the hated New York Giants. Looking out the bathroom window was Sal “the Barber” Maglie and third baseman Hank Thomson. When I first looked at Sal, I said, “Hi Sal” he said “Hi Kid”. I then said, “Hey Sal, would you sign an autograph for me?” He replied, “Sure”. I realized then that there was a cross-cross, heavy duty iron screen over the window. All I had with me was my small, spiral notebook I used for homework and a short pencil. I asked Sal, “How can I give you this notebook?” He replied, “Just pull a sheet of paper out, take the pencil, roll the pencil inside the paper, and pass it through the screen”. So, I tore out a piece of paper, rolled the pencil inside the paper, and passed it through the screen. Sal and Hank both signed it for me and passed it back. From that day forward, even though I was a big  Dodgers fan, I always liked Sal Maglie as a person. While I was in the US Navy in 1956, Maglie was traded to the Dodgers and pitched a no hitter. I was very happy for him.

Maglie would help the Giants complete their miracle run against the Brooks in 1951, leading the league with 23 wins, and would win 18 more games in 1952. A bad back in 1953 would limit his effectiveness, and his age (36) made doubters of even his most ardent supporters that he could bounce back in 1954.

He proved the naysayers wrong by posting a solid season (14-6, 3.26 ERA) in 1954, helping the Giants win their last ever World Series in New York.

The next season would be his last at the Polo Grounds, as despite a 9-5 record by the end of July, he was sent to the Cleveland Indians, but it would not be his last season in New York.  Maglie would pitch until he was 41, ending his career with stints in the Bronx with the Yankees, and with the St. Louis Cardinals before retiring in 1958.  Ironically, the “Demon Barber” would enjoy his last hurrah with the hated Brooklyn Dodgers, of all teams.

While still with Cleveland, Maglie had pitched well in an exhibition game in Jersey City (Dodgers owner Walter O’Malley had scheduled a number of games in Jersey City in 1956 in an attempt to jostle NYC lawmakers to build him a stadium in Brooklyn), and then-GM Buzzy Bavasi thought Maglie might be able to help the Dodgers.  Brooklyn had some injuries to its pitching staff in 1956, and manager Walter Alston didn’t trust a young left-hander named Sanford Koufax just yet, so for the bargain price of 100 dollars, the Barber became a Brook.

On his way to a 13-5 record, he would toss a no-hitter; win the game that clinched a tie for the pennant and in the World Series against the Yankees, would earn his only World Series victory (a 6-3 win in Game 1).  In Game 5, he would be on the losing end of the Don Larsen perfect game, and once again, it was wait until next year for the Flatbush faithful.

In later years, he would receive more attention, albeit negative, in ex-Yankee Jim Bouton’s book “Ball Four”. Maglie, then serving as Bouton’s pitching coach for the expansion Seattle Pilots, would be portrayed as a closed-minded, uncommunicative, and less-than-enthusiastic about Bouton’s new knuckleball,. type of person.  It should be noted that the one year that the Pilots would exist (they would move to Milwaukee to become the Brewers the following year) it was a miserable experience for all involved.  Besides, in 1967, as pitching coach for the 1967 “Impossible Dream” Red Sox, both Jim Lonborg and Dick Radatz would give a great amount of credit to Maglie being one of the best pitching coaches in the game .

Today, the best of baseball fans, the ones from New York City, the “baseball city” as former Mets GM Omar Minaya once called it, will remember Maglie as one of the Knights of New York Baseball during the golden age of the sport in Gotham.

An era in which Sal Maglie would never back down, never give an inch, and own the inside part of the plate.

Monday Mets: How Do They Manage 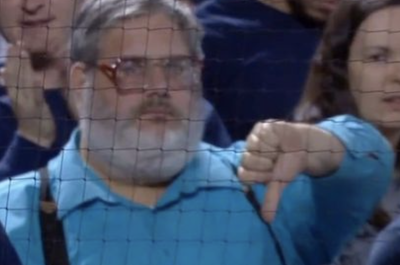