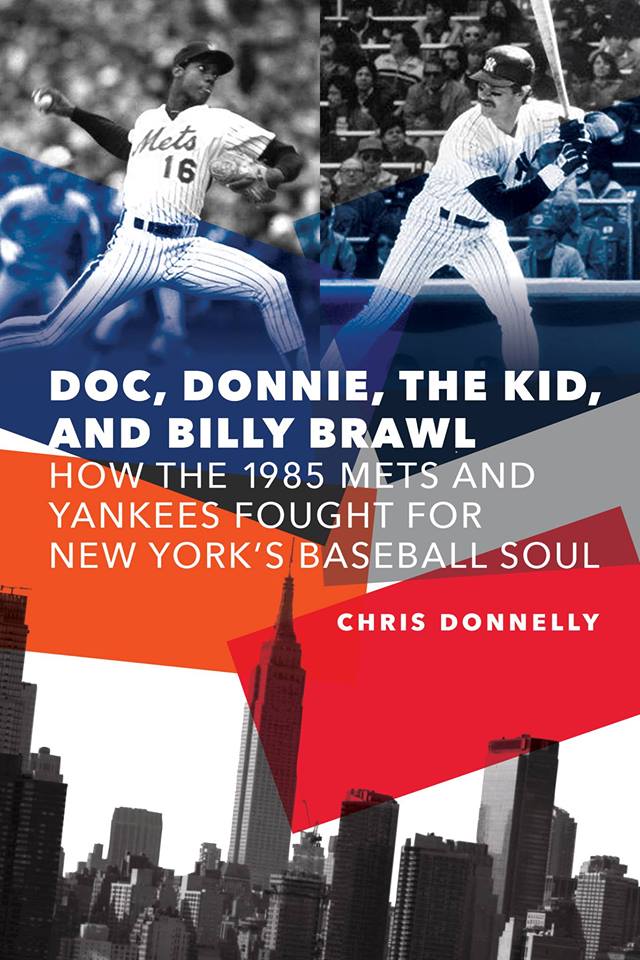 The mid-80s were a time of change in New York baseball. For the Yankees, gone were the Graig Nettles-Thurman Munson-Reggie Jackson-et al bunch that won five division titles, four pennants and two world series in six years from 1976 through 1981. And for the Mets, the era of Doug Flynn, Willie Montanez and Craig Swan was over, and through a series of shrewd moves and skilled drafting, it was time for the kids—and “The Kid”—from Queens to take back the city.

Whether one subscribes to the theory of New York as a National League town, it seems that when the Mets are contending, there is an extra jolt in the baseball scene here. By 1985, Mets fans had improbable runs in 1969 and 1973, but also a string of seven straight losing seasons just snapped by an encouraging 90-win campaign the year before. “Ya Gotta Believe” was back, and Mets fans were ready to cheer on their new heroes, including pitching phenom Dwight “Dr. K” Gooden.

Up in the Bronx, George Steinbrenner was at his most George Steinbrennerist, firing Yankees legend Yogi Berra 16 games into the ’85 campaign, replacing him with his favorite punching bag, Billy Martin (who did a fair amount of punching himself). The team, though lacking somewhat in pitching depth, was an offensive juggernaut which, led by emerging superstar Don Mattingly, hung in until the final weekend, making the year the first in which both N.Y. entries were simultaneously playing meaningful contests into September.

In his standout chronicling of the year, Doc, Donnie, The Kid and Billy Brawl: How the 1985 Mets and Yankees Fought for New York’s Baseball Soul (University of Nebraska Press, 312 pps, $29.95), author Chris Donnelly dives into the stories and personalities that made the season so special. Donnelly took a few minutes to talk to Gotham Baseball about the book and the 1985 campaign.

Gotham Baseball: What made the 1985 N.Y. baseball season, one that hasn’t received much attention, appeal to you as a book idea?

Chris Donnelly: Originally I was thinking of a much larger project, one that would look at the trajectory of both teams throughout the 80s as the Mets took off and the Yankees fell apart. But it became clear pretty quickly how massive a book that could be because any one year or even one player or coach or owner could be a standalone book. So instead I zeroed in on the year where the two teams met in the middle, the Mets going up, the Yankees coming down, but the intersection of those two things happening. It just happened to be 1985, the middle of the decade.. What you ended up with was one of the most exciting New York baseball seasons ever, with both teams fighting until the second-to-last day of the season to make the playoffs (the Mets finished 98-64, the Yankees finished 97-64). Moreover, even though they finished with essentially the same record and both came just short of the playoffs, they were two significantly different teams in terms of make up and drama. The Mets were young, dynamic, in-your-face hard partyers. The Yankees, even though they had their share of characters, were more corporate, had more off the field distractions, and every day they were dealing with Steinbrenner and/or Billy Martin’s antics.

When you look at everything that occurred that year, on and off the field, few seasons in the history of New York baseball can match this one. You have drug trials, a manager fighting one of his pitchers, a manager managing a game from his hospital bed (and sometimes from a bar), one of the greatest individual pitching performances in a single season, the emergence of an icon at first base in the Bronx, a former Met winning his 300th game against the Yankees, and a Yankee winning his 300th game on the last day of the season. There were brawls on and off the field, public urination, Canadian demands for public apologies, and, somewhere in-between all of that, two teams fighting and almost reaching the postseason. 1985 had almost everything you could think of.

GB: Do you think if the Yankees had kept Yogi Berra as manager that they would have made a similar run? Or even done better and won the division?

CD: It is hard to say if for no other reason than Yogi was probably never going to make it through the 1985 season. One of the biggest issues for Steinbrenner in firing Yogi was that he felt the team didn’t respect him (which was not true). George wanted someone who would make the players get in line and that just wasn’t how Berra operated. So even if they had turned it around under Yogi, whenever the next team slump occurred, it would have been the excuse George needed to let him go.

All that said, the team was never completely healthy under Yogi, so it was not his fault they got off to the 6-10 start. It’s hard to argue they would not have played better than that once players started returning from the D.L. They would have been successful under him eventually that year. And Yogi would not have cracked the way Billy Martin did in September, making questionable managerial decisions and fighting fans and his own players. So it is probably fair to say that, had Yogi been the manager when the Yankees were just a game and a half out in mid-September, they could have at least forced a tiebreaker one game playoff with Toronto.

GB: If the teams ended up matching up in the World Series that year, what would the scene have been like? Even wilder than 2000? Which team do you think would have won?

CD: Yes, I think wilder than 2000 for several reasons. First, both teams had not been in the playoffs or won a championship (though the difference in how long between the Mets and Yankees was significant) for years, both had gone through some rough stretches, and neither had any immediate success they could point to. That was not the case in 2000, especially since they had come so close to playing a Subway Series in 1999. Second, by 2000, you had several well-known, beloved players who had played for both teams at that point (Strawberry, Gooden, Cone) and there wasn’t much animosity (minus Clemens v Piazza) between the two teams. Third, that year was a tipping point in terms of who controlled the heart of the city, so the World Series would have been about more than just who won: it would be about which team was New York’s team. That wasn’t really the case in 2000, even if the Mets had won that series. Fourth, the matchups would have been more interesting in ’85. Could the MVP, Don Mattingly, catch up to the blazing fastball of the Cy Young, Doc Gooden? Could Strawberry turn on a Guidry slider? Could Carter gun down Rickey Henderson trying to steal second?

Who would have won? Man, that’s a tough one. The Yankees’ offense was a juggernaut, while you couldn’t top the Mets’ pitching. I think ultimately it may have been one of the best World Series ever, but with the possibility of Gooden throwing three games (even if two of them would have been at Yankee Stadium) I give the edge to the Mets.

GB: Who were some of the more interesting characters from those teams that you spoke with for the book? What did they say that surprised you?

CD: Wally Backman was great for a quote, always honest and colorful about his time in New York and his teammates. Phil Niekro was entertaining too. He has a dry wit about him that makes his stories more entertaining. Rex Hudler, even though he was only with the Yankees for a short period of time in ’85, still had some great stories of his interaction with various players and with Steinbrenner.

Some of the players and personnel I interviewed who have since passed on – Gary Carter, Frank Cashen, Don Baylor, Rusty Staub, Mel Stottlemyre – were among the best story tellers. Carter spent a significant amount of time with me detailing the trade to New York and I was amazed at his ability to remember certain details from the 1985 season (his five home runs on the west coast late in the season for example). Cashen surprised me with his candid review of how bad the Mets were when he took over as GM. Staub was great because he had a ton of stories about his time from the mid-70s in addition to the 80s, and you could tell by talking to him that he just knew the game. Same with Stottlemyre, especially when he talked about Gooden that season. I loved talking to Don Baylor because he had been with a few teams, so he could provide perspective from different sides.

CD: The Mets had built a solid foundation around good trades and free agent signings. They didn’t trade away young talent for aging, past-their-prime stars, but instead let it grow and develop in the minors before making an impact in Flushing. They essentially did everything in the early and mid-80s you would want a team that is rebuilding to do. Their pathway forward for the rest of the decade was cemented with the Carter trade. Ultimately, however, their success was their undoing. The ’86 team was slowly chipped away at as the club sought to get rid of bad influence, hard partying players. By 1991 they didn’t have, as Staub would say, “those horses” left to compete in the N.L. East. They made a lot of signings and trades that, for a variety of reasons, just did not work out. And by ’93 they’d hit bottom, right around the time the Yankees were reemerging.

If the Mets did everything right, the Yankees did everything wrong. They traded an incredible amount of young talent (Doug Drabek, Bob Tewksbury, Jay Buhner just to name a few) in exchange for minimum impact players. In his panic to try and recapture the city from the Mets, Steinbrenner made increasingly worse trades and signings, rarely getting the better of the deal. By 1989, the Yankees minor league system had been decimated and for all of that, the team barely had any of the players they had received in return on their roster by 1990. Combine that with George’s continued meddling in the day-to-day affairs of the team and the manager, and that’s why the Yankees finished last in the A.L. East that season. Fortunately for the club and its fans, Steinbrenner was banished that year (later reduced to a suspension) for essentially trying to blackmail Dave Winfield. In his absence, the team, led by Gene Michael, was able to rebuild their farm system, make shrewd trades and sign high impact players. By 1993, the Yankees were competitive again and just in time to take the city back from the Mets.