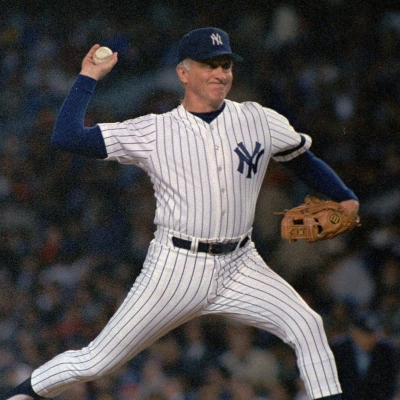 Maybe it’s because I am so New York-centric when it comes to baseball, but when I heard that Hall of Fame pitcher Phil Niekro died this past week at 81 years old, my first thought was of him as a Yankee.

In his last game as a Yankee, Niekro tossed a four-hit shutout against the Blue Jays in Toronto, and famously did not throw a single knuckleball in the victory, the 300th of his career.

But the knuckler was his signature pitch, and Niekro rode that pitch for over 5,000 innings (5,404 IP to be exact) and – and he finished his remarkable career with 318 wins and 3,342 strikeouts.

Niekro was elected to the Baseball Hall of Fame in 1997 and served on the Museum’s Board of Directors since 2009. Donations in Phil Niekro’s memory can be made to Edmondson Telford Child Advocacy Center, 603 Washington St. SW, Gainesville, Ga., 30501.

“Phil Niekro’s record on the field ranks him as one of the game’s finest pitchers,” said Jane Forbes Clark, Chairman of the National Baseball Hall of Fame and Museum. “As a mentor, leader and friend, Phil brought out the best in all of us in Cooperstown. Over more than a decade of serving as a Member of the Board of Directors of the Hall of Fame, his wisdom, his compassion, and his love for the game proved to be invaluable in helping us shape our decisions. On behalf of the Board of Directors and the staff of the National Baseball Hall of Fame, I would like to send our heartfelt condolences to Nancy Niekro and the Niekro family.”

For his humanitarian service, Niekro was honored with the Lou Gehrig Award, Roberto Clemente Award and Brian Piccolo Award.

In a year when we have lost so many of our baseball legends, it’s worth noting Niekro won his 300th game the same year that Tom Seaver won his 300th with the White Sox against the Yankees. An odd coincidence that two Hall of Famers, who faced each other as 20-game winners in the 1969 NLCS, have been lost to us in 2020, a year that can’t end soon enough.

Farewell, Knucksie, who taught us all ”you don’t have to throw the ball 95 miles an hour and have a Dwight Gooden curveball” to pitch in the big leagues.

Mark C. Healey is the author of Gotham Baseball: New York’s All-Time Team. You can order it here http://www.gothambaseball.com/gotham-baseball-new-yorks-all-time-team/