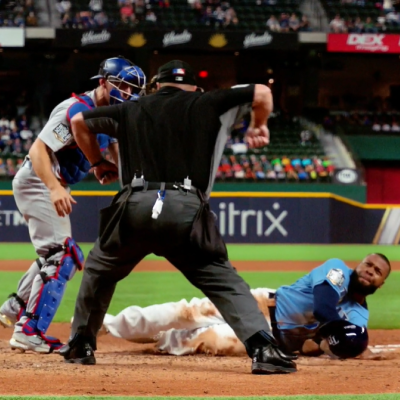 “In a year that has been so improbable, the impossible has happened.”

Vin Scully wasn’t talking about the 2020 baseball season and World Series when he uttered that immortal phrase. Rather, it was following Game 1 of the 1988 Fall Classic, the last one won by his hometown Los Angeles Dodgers, on a dramatic two-out, two-run, walk-off home run by an ailing Kirk Gibson off Dennis Eckersley.

The improbability of it taking the Dodgers 32 years (!) to win another World Series has nothing on the seeming impossibility of even getting the World Series played in 2020. With COVID-19 wracking the world’s population and wrecking sports schedules, for a good portion of the summer it looked like the baseball season would never even get started.

But an abbreviated 60 game regular seaon and expanded 16-team playoff format later, the Dodgers and Tampa Bay Rays squared off in Arlington, Texas, another concession to COVID, in front of a limited crowd.

And just as the games went on, producing another exciting series, the official World Series film chronicled the whole thing, just as it has for nearly 70 years. And once again, acclaimed director Jed Tuminaro was charged with putting it together.

Scully, as he has lent his voice to so many World Series past, narrates “The 2020 World Series,” now available on Blu-Ray, DVD and digital. Extensive player interviews, behind the scenes footage and unique access, despite the conditions caused by COVID, make this a must-watch for Dodgers fans in particular and all baseball fans who love great storytelling.

Tuminaro took some time to discuss some of the aspects of making the film in these unique circumstances with Gotham Baseball this week.

Gotham Baseball: When was the decision made to have Vin Scully do the narration?

Jed Tuminaro: Once we were about two games into the series, so pretty early on. Once it got down to the two teams, we started to talk about it, and it was kind of like a no-brainer if he was available. We kew what we wanted to do, and once the Dodgers were on the cusp were able to finalize it.

JT: The first was limited resources. We have great camerapeople and producers but just not as many. And with us having to take so many precautions, quarantining 10-14 days in Texas before the series, it was a challenge. Then there were some of the things we take for granted–the different levels of access that we would, in normal years, have, that we had to change to accommodate restrictions. where we can be and can’t be.

GB: As a filmmaker, what are you looking for that will distinguish this film and this series from others, outside of COVID?

JT: Well, even though you said outside of COVID, we wanted to capture what this season and series felt like. Not just treat it like any other season, but show what made it different. We wanted to show the way the fans were seated in the stands, the player interviews in the press conference, which ordinarily wouldn’t be that compelling, but here is a big press room and the player is alone doing the press interviews by video. That is unique to this year

But aside from COVID, we focused on the teams and their stories. They were the two best teams, but they were so different in makeup, their paths to get there, their recent history. It was a balance to best tell the story.

GB: How do you determine how much to use footage, interviews, play by play, off field stuff?

JT: It’s a little bit of a cheezy analogy, but it’s like a cook preparing a meal: there are all the ingredients, what’s the best way to combine them for the best product. We like to tell the story as much as we can through the player interviews, whether they are on the field, sit-down, in the press conference or kind of on the fly. The more we can tell straight from the players, the better. But we have great writers, too, and access to a lot of footage. It’s a blend of everything.

GB: Are you a fan of the old WS videos from the 40s, 50s, and on? Do you look at those in forming the way you direct the recent ones you’ve done?

JT: I have always been a fan of championship films, whether it’s baseball or other sports. While we want it to feel new and different and modern with all the new things we can do, I do think there is some responsibility to what the film is–a record of the series. Fans like to see the highlights, the big moments and the great plays. It’s definitely a balance.

GB: Are players generally cooperative? They seem to be enjoying the boom mikes and the camerapeople in BP, but do they know it’s the WS film and do they treat you differently than other media?

JT: They are. You worry going in that some teams are better, more cooperative than others, that might understand better what you are doing. The Rays and Dodgers are great to work with. They are playing on the biggest stage, trying to win a championship. We are trying to get as much as we can and be as out of their way as possible. But they were great; we had interviews scheduled with some of the Dodgers after that dramatic Game 4 loss, but they all did them. We have good camera crews and producers who know how to blend in.

GB: When do you start following a team closely for the film? LCS? Earlier?

JT: This year was unique, sometimes we will drop in on teams during the season or an earlier playoff series, but this year was different, we couldn’t really get to the teams before a day or so before the series. In 2016, for example, with the Cubs, we went to capture the end of the NLCS because of the historical significance of them making the World Series.

Montgomery Earns the Save as Caracas Defeats Lara