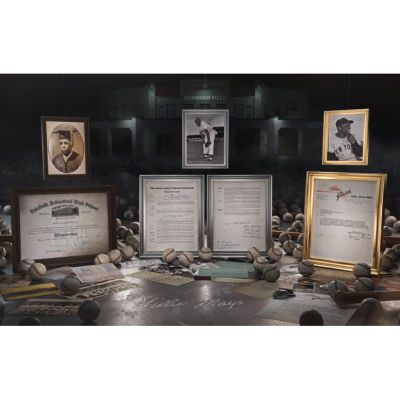 Today, the Costacos Collection announced its inaugural drop will feature one of the most respected legends in professional sports, New York and San Francisco Giants center fielder Willie Mays. The 90th Birthday Celebration Drop will take place this Sunday, October 24, as an ode to Willie’s iconic number and two days before the start of MLB’s World Series, the MVP Award for which is named after Mays.

Willie will be donating all proceeds from the drop to his Say Hey Foundation’s effort to honor the people who gave him a start in life, by establishing a baseball academy for underprivileged youth where he grew up in Alabama, and to restore the historic baseball facilities at Rickwood Field where Willie started his career with the Negro League Birmingham Black Barons. Mays said, “I’ve never forgotten the people who supported me, taught me, and helped me find my way. I want every child to have the same chances that I had, and this gives me a way to do that starting in my original hometown. Rickwood was the first place I ever got to see professional ballplayers, and I want these kids to learn the game and be inspired the way I was.” Rickwood Field itself serves as a central theme of the drop’s art.

The first drop tells the story of Willie’s path to the majors, from Fairfield Industrial High in Birmingham, to the Negro American League, culminating with his move to the New York Giants with whom he would win the Rookie of the Year Award in 1951. The various edition pieces capture the key themes and statistics of those periods, and the 1/1 hero piece adds to the story with a number of never-before-seen personal documents and images from Willie’s journey – most notably, a copy of Willie’s high school diploma, in which he was assigned a career in “cleaning, dyeing, and pressing.” Willie recalls that all Black kids were assigned trade careers, while white kids “on the other side of the barbed-wire fence” were able to choose their paths and professions. Willie’s journey to becoming one of America’s most beloved sports figures and a recipient of the Presidential Medal of Freedom was only possible because of baseball and the people of Fairfield and beyond who helped him chart a different path. The NFT art piece includes a voiceover in which Willie’s powerful story is told by an iconic voice of sports, Bob Costas, who will join Mays in donating to the baseball academy and Rickwood Field restoration project.

Costacos explained, “In the mid-1960s, I learned to read a box score by stealing my dad’s paper to see what magic Willie Mays had done the night before. Yet with all the historic moments in his career, Willie, the humblest GOAT you’ll ever meet, asked us to focus not on his 24 All Star Games, 2 MVP awards, World Series victory in ‘54, his 12 Gold Gloves or 660 home runs – rather, he saw this as a unique opportunity to pay tribute to his roots and earliest days growing up in Fairfield, Alabama. We’re honored to partner with the great Willie Mays and to give fans an opportunity to connect with the legend through one-of-a-kind digital art in support of the Say Hey Foundation.”