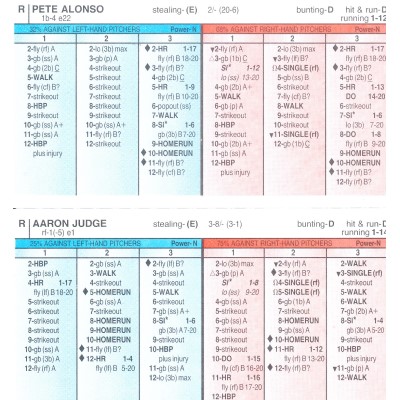 While there may be no baseball at  Yankee Stadium or Citi Field this spring until owners and players settle their differences, fans don’t have to go without their favorite sport come Opening Day. Strat-O-Matic (@StratOMatic), the market leader in sports simulation, today announced it will provide daily simulations of scheduled games beginning on Thursday, March 31, which was to be the date of the first contests across the league. Those following @StratOMatic on Twitter will help determine the team assignments for notable remaining free agents during the week of March 21-25.

Strat-O-Matic, which performed a simulation of games during the COVID-19 shortened 2020 season, will publish the results daily on its Website at http://www.strat-o-matic.com as well as through its various social media channels. These simulations have proven to be extremely accurate, with Atlanta’s 2021 baseball championship predicted in the preseason simulation and Los Angeles’s football title nearly matching the exact score and closely approximating statistics for top stars Matt Stafford and Cooper Kupp as the most recent examples.

“We are hopeful that the season will get underway soon, but in the meantime, we have fans covered,” said Hal Richman, Strat-O-Matic founder. “Fans absolutely loved how we kept their baseball juices flowing with the simulation when play was suspended in 2020, and we hope that this keeps them ready for when the players are back on the field.”

Strat-O-Matic, which celebrated its 60th anniversary last year, had its own annual “Opening Day” in February, and although it again couldn’t be held in person, thousands of fans celebrated the arrival of the new cards based on the 2021 season statistics as well as various newly formulated sets depicting the 1986 and 1947 seasons, the latter just in time to celebrate the 75th anniversary of Jackie Robinson’s debut.

Wade Relaxing Since Promotion to Trenton

On Another Field: When The Past Met The Future At Fenway

Last reply was 5 months ago